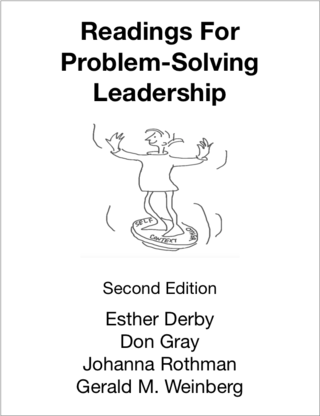 Do you equate leadership with management? Do you wonder how to find your leadership style? We need leaders at all levels, in all teams, everywhere in all organizations. You can exercise your leadership skills, once you know how to lead. Read these essays and chapters, and then you can start practicing your problem solving leadership.

This is the readings book we provide to the Problem Solving Leadership workshop participants.

I started my career as a programmer, and over the years I’ve worn many hats, including business owner, internal consultant and manager. From all these perspectives, one thing became clear: our level of individual, team and company success was deeply impacted by our work environment and organizational dynamics. As a result, I have spent the last twenty-five years helping companies design their environment, culture, and human dynamics for optimum success.

My most recent book is 7 Rules for Positive Productive Change: Micro Shifts, Macro Results. It is available on amazon.com.

My goal is to create sustainable work environments that fulfill organizational needs and enable personal growth. I work with executives and managers building coherent organizational structures, processes and goals where teams can flourish. I base my consulting on systems thinking and human systems dynamics focused on increasing the organization’s ability to deliver user value. Nationally, I've worked with clients from Jacksonville, FL to Seattle, WA. I also work internationally when requested.

Johanna Rothman, known as the “Pragmatic Manager,” offers frank advice for your tough problems. She helps leaders and teams do reasonable things that work. Equipped with that knowledge, they can then decide how to adapt their product development.

With her trademark practicality and humor, Johanna is the author of 18 books and hundreds of articles. Find the Pragmatic Manager, a monthly email newsletter, and her blogs at jrothman.com and createadaptablelife.com.

She is the author of these books:

In addition, she is a contributor to: