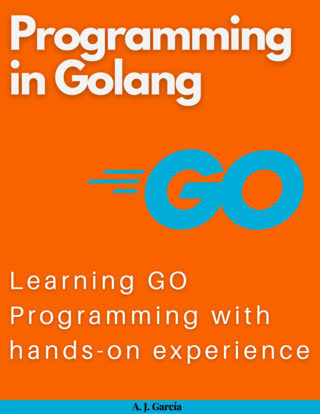 The idea behind the book is to present a series of exercises with code examples so you can understand the main functionalities of GO, then you can go ahead tweaking the lines of code and running them on your system. In this way you will be learning by doing.

The Book presents Code, Explanations and Output for each feature. It's recommended to know the basics of programming or another programming language like Python or Javascript to take full advantage of this book.

Check out other books from the author:

Up to Speed with Javascript in 59 minutes

What is Golang used for ?

This pdf book is a good introduction to programming in go, golang is a system level language alternative to C or C++, it was developed by Google for their servers and networkds and is mainly used by developers to programm large sacalable applications.

Is Golang better than Python ?

Golang is becoming a better alternative than Python for certain applications, specially for web app development since it has shown to be faster, on the other hand if you are looking for a language with flexibility and many libraries then Python would be better in that regard.

Go has a simple and easy to read syntax which make developers feel and be more productive, the demand for Golang developers has increased in the last year and companies are starting to migrate the code base for some large scale projects into GO.

According to the Go Developer Survey 2021, an overwhelming 81% of the respondents felt either very or extremely productive in Go. Even if you are just a beginner in computer science, Go is a good language to begin building up your programming knowledge.

Go's syntax is small compared to other languages, and it's easy to learn. You can fit most of it in your head, which means you don't need to spend a lot of time looking things up. It's also very clean and easy-to-read.

Is Go Programming easier than Python ?

Golang is a simple, easy to understand programming language with simple syntax. Though Python also has a simple syntax, Golang is simpler to learn and work with. Golang is based on C language so you can trust its clarity. Golang came into existence to solve practical problems at Google, and thus it is more pragmatic.

Why is the Go compiler so fast?

Many reasons why Go compiles quickly: Fast compile times are an explicit design goal of Go. The grammar is compact and regular so it is simpler to parse. Each Go file declares its dependencies and it is an error to declare a dependency that is not used, so computing the dependency tree is efficient.

Go is an easy language for beginners to learn.

Go is a great programming language for beginners because the syntax is small – you won't have to spend ages paging through reference documentation. It's clean and easy to read, meaning you'll be able to understand what you and others are writing.

Is Golang good for beginners?

Is Golang better than node?

When compared to Node JS, Golang is a better option for raw performance and computation. It is a fast, lightweight platform as it is based on characteristics of C and C++. On the other hand, statically-typed Node JS is a derivative of JavaScript and hence, it is generally slower than other programming languages.

How long will it take to learn Golang?

If you do not know C or Java, it will take you one to three months to learn to use Golang professionally. You will want to continue practicing your skills for several more months if you want to become a Golang developer.

I started my coding career back in 2003. Lately I've been involved a lot in Javascript for frontend and the backend.

I would love passing along to you some of the experiences and challenges I've faced over the years.