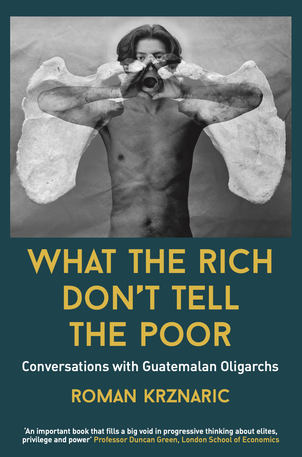 What The Rich Don’t Tell The Poor

What The Rich Don’t Tell The Poor

The new book from Roman Krznaric telling the remarkable story of Guatemala’s wealthy economic elite or ‘oligarchy’ – in their own words.

How does oligarchic power work in practice?

In this fascinating and original study of Guatemala’s economic elite or ‘oligarchy,’ Roman Krznaric explores the inner workings of the country’s wealthy business sector and how they have maintained power and privilege in the face of change. Based on extensive personal interviews, What The Rich Don’t Tell The Poor reveals the oligarchs speaking candidly in their own words on issues ranging from political violence and civil war to race and inequality. The result is a pathbreaking work of political and sociological analysis that offers unique insights into the global phenomenon of oligarchic power.

What The Rich Don’t Tell The Poor was written in 2006 and is now published for the first time in its original version. As Krznaric writes in a new 2022 preface to the book, although much has changed in Guatemala in the intervening years, the oligarchy remains a formidable and largely unchallenged economic and political force.

Krznaric’s seamless and magical prose delights on every page

Krznaric writes with passion and lucidity

A unique combination of teaching, storytelling and practical action

Roman Krznaric is a public philosopher and former political scientist who writes about the power of ideas to change society. His bestselling books such as The Good Ancestor and Empathy have been published in more than twenty languages. Roman studied at the universities of Oxford, London and Essex, where he wrote his PhD on the Guatemalan oligarchy, and taught politics and Latin American Studies at the universities of Cambridge, Essex and City University, London. He is currently a Research Fellow of the Long Now Foundation and a member of the Club of Rome.