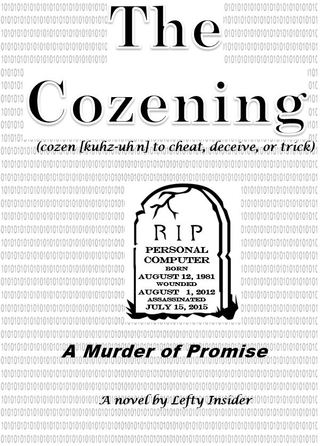 A Murder of Promise

This is a short version of a much longer story. It is after all, the story of a life amidst a technology revolution. This story is not for the faint of heart or those who do not really like to read. So if you are one of those, I would suggest that you stop now to save yourself some time and effort, and perhaps frustration.

Get Community Edition
Table of Contents

The Cozening (A murder of promise) holds a riveting in person lived history of the development of the Windows 10 computer operating system, written as a highly illustrated third person narrative. Within, our protagonist shares actual observations, commentaries, and thoughts reflected in message conversations and new stories. He also pens first person clever and comical geek adventure stories to his mates in these Insider software messaging forums. These stories reveal what could have and perhaps should have been.

The monopolistic corporation promised the online volunteers, named Insiders, that in return for their expertise, experience and efforts, they would get to help shape the future of an operating system. Instead this corporation chose to betray their unsuspecting decades old customer base because they wouldn’t notice or wouldn’t care. Or because most would not understand the implications of a corporation exercising a secret Eminent Domain over their personal data disguised with the euphemistic and misleading names of telemetry, clouds, and security.

What they saw was the operating system they had known and loved for decades being disassembled a piece at a time. The Insiders discovered that they became free replacements for a cost reduced and dismantled corporate testing department as Alpha testers. While the whole world of gullible and trusting computer users would soon become no cost corporate Beta testers.

The Insiders decided that they could not let this happen. A Merry Band of Misfits and Malcontents organically formed among the Insiders to push back against this perceived travesty. But they were banned and banished repeatedly as they relentlessly and religiously tried to tell truth to power and shape both the software and their own futures.

But before this great Insider forum volunteer purge our hero, a particularly crafty Insider, started message threads posing important questions. These questions set off a chain reaction of facilitated discussions and generated a massive number of messages. He was of course banned repeatedly for doing these things, but resurrected himself under various pseudonyms to return again and again. He also incrementally released episodes of an entertaining saga chronicling the fictional activities of his merry band of cohorts chosen from regular participants of the blogathon as they toured the continent promoting secure computing and hacking away at the ultimate operating system for personal computers.

The story reveals in-depth, a dirty side of a once benevolent turned malevolent software industry monopolist and their latest computer operating system’s epic failure to continue to advance its use as a tool to expand human capabilities. These corporate overlords chose instead to corrupt it into a surveillance and monetization tool which our hero struggles against believing that this will only bring ruination to the machine he grew to respect and love. And with it his hopes for the future.

I am a veteran of the U.N. Peace Keeping Force in South Korea, a former Peace Corps volunteer in West Africa, and I also taught at the secondary and post-secondary levels. I worked in corporate technical training and course development, and technical document production. I was also a urban public school board member and substitute teacher. I was a multilevel baseball and softball coach for ten years. I created, managed, and operated two small businesses involved in document production and computer integration for more than fifteen years each. I am now retired, and when not working on computers, I am writing in the computer user forums, or writing fictional stories.