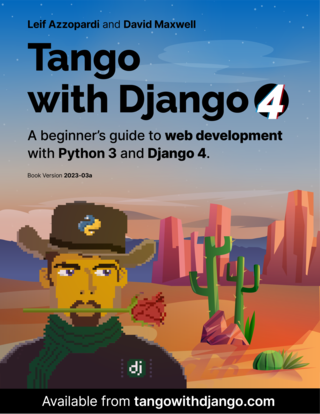 A beginner's guide to web development with Django 4

This book is 57% complete

If you want to learn how to use Django to build web applications, then Tango with Django provides an all round end-to-end guide for beginners. Eleven chapters are now available at a lower introductory price to get you started on creating apps in Django!

In this book, you will learn how to build web applications using Django 4 by building a simple web app called Rango, a directory of categories and links. Through the process, you will learn how to set up your Python environment and Django projects, before learning the key design pattern behind Django: Model-View-Template.

Throughout the book, we provide workflows to get you into the Django mindset, reducing the learning curve, explaining the hows and whys of software development, and advocating best practices when developing your web apps. Through the book, you will learn how to integrate user authentication, build and customize forms and templates, along with advanced features like class-based views and testing.

In addition, we've included chapters that range from design to deployment -- covering the full stack of web development. So you will also learn about how to incorporate CSS and Twitter's Bootstrap, Javascript, and JQuery, along with external APIs, like Microsoft Azure's Bing Search API. We also cover how to deploy your Django application to PythonAnywhere.com.

This is the fifth edition of Tango with Django which has now been heavily revised and upgraded to make use of Django 4+ using Python 3.8+. The book was first launched in October 2013 by Dr. Leif Azzopardi and Dr. David Maxwell which we developed to teach web development at the University of Glasgow. The book has been used as the course text ever since, with thousands of undergraduate and postgraduate students using it over the years. Previous editions of the book are available at: www.tangowithdjango.com -- and previous versions of the book has been downloaded over 2 million times.

So, if you want to learn Django and build web applications, then Tango with Django provides an all-round end-to-end guide for beginners.

The Book - Black Friday to Cyber Monday 30% off Deal

Get 30% off from Black Friday to Cyber Monday!!