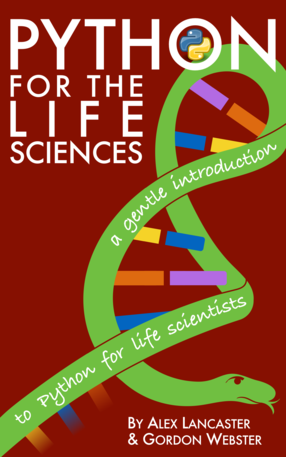 Python For The Life Sciences

A gentle introduction to Python for life scientists

Python For The Life Sciences is an intuitive and easy-to-follow introduction to computer programming, written specifically for biologists with no prior experience of writing code.

THE NEW EDITION OF THIS BOOK IS NOW PUBLISHED BY APRESS AND HAS A NEW WEBSITE.

“Alex and Gordon’s enthusiasm for Python is contagious"

"A lovely book with humor and perspective"

"Python for the Life Sciences is an excellent tutorial"

If you’re a biologist with little or no experience in programming, but who would like to learn how to write code, Python For The Life Sciences is probably the book you’ve been waiting for!

Virtually all of the examples in the book are drawn from across a wide spectrum of life science research, from simple biochemical calculations and sequence analysis, to modeling the dynamic interactions of genes and proteins in cells, or the drift of genes in an evolving population.

Best of all, we show you how to implement all of these projects in Python, one of the most popular programming languages for scientific computing - a language so versatile and easy to use, that we call it The Swiss Army Knife of Programming Languages.

To get the academic discount for students and teachers, email us at info@amberbiology.com using your email account for your accredited school or college, tell us who are and what department you’re in, and we’ll send you a coupon to purchase the book at the current academic price ($30.00).

The authors of this book are both computational biologists and principals at the digital biology consulting firm Amber Biology, based in Cambridge Massachusetts.

After completing a PhD in biophysics and structural biology at the University of London, Gordon has worked in life science R&D in both Europe and the U.S., with a particular emphasis on molecular engineering and computational biology. In academic and commercial environments ranging from universities and medical schools to small venture capital-funded startups and global pharmaceutical companies, he has served in a diversity of roles from research faculty to company vice president.

Gordon is the author of numerous original scientific articles and patents and has created and managed some very successful research partnerships with industrial, academic and government organizations. He initiated and managed the first translational oncology clinical trial at a multinational pharmaceutical company and has coached and led research project teams in large matrix organizations, as well as large, distributed teams of scientists. software developers and technical specialists, working together across multiple time zones. Gordon’s career path has always reflected his belief that the most interesting and potentially promising areas of research lie at the intersections between the traditional scientific disciplines.

An Interview with Gordon Webster

Alex Lancaster is an evolutionary biologist, engineer, writer and consultant. Alex completed his Ph.D. in evolutionary biology at the University of California, Berkeley, and also holds bachelor's degrees in physics and electrical engineering. He has worked in research & development in both Australia and the United States with a major focus on evolutionary and systems biology. He has also worked extensively in genomics, analyzing next-generation sequencing data and has developed tools for clinical and population genomics, with a particular specialization in immunogenetic applications. He has held research and faculty positions in academia, as well as R&D positions in the broadcasting and IT industries.

Alex has published many peer-reviewed papers and is interested in solving problems in biology using evolutionary and complex adaptive systems approaches. He has done pioneering work in this area as a co-developer of the open-source agent-based modeling toolkit, Swarm, one of the first tools for large-scale modeling of collective behavior in biology and beyond. He is passionate about the power of open source and open science approaches to accelerate discovery.

An Interview with Alex Lancaster

Alex and Gordon’s enthusiasm for Python is contagious

A lovely book with humor and perspective

Prologue: Welcome to the kingdom of Nerdia

Getting started with Python: Setting yourself up to use Python

We get you started on your journey, all the fun details on getting your very own Python environment setup up.

Python at the lab bench: The fundamentals of the Python language

A statistical interlude: Of Bayes theorem and biomarkers

Here we discuss Bayes’ Theorem and implement it in Python, illustrating in the process why even your doctor might not always estimate your risk of cancer correctly.

Did we already mention how great Python is for handling biological sequence data? In this chapter we expand our discussion to sequence file formats like FASTA.

Finding needles in haystacks: Regular expressions for genomic and sequences

In this chapter we show how to search even the largest of biological sequences quickly and efficiently using Python Regular Expressions – and in the process, blow the lid off the myth that Python has to be slow because it is an interpreted language.

Just when you thought you had heard the last about sequences, we explore the foundational concept of Object Oriented Programming in Python, and demonstrate a more advanced and robust approach to handling biological sequences using Python objects.

We demonstrate how easy it is to use Python to create a simple next-generation sequencing pipeline – and how it can be used to extract data from many kinds of genomic sources, up to and including whole genomes.

The wells! The wells!: Microtiter plate assays I: data structures

We use Python to manage data from that trusty workhorse of biological assays, the 96-well plate.

Molecules in 3D: Mathematics and linear algebra for structural biology

In which we demonstrate Python’s ability to implement three-dimensional mathematics and linear algebra for molecular mechanics. It’s nano but it’s still biology folks!

Turning genes on and off: Visualizing biochemical kinetics using matplotlib

In which we use Python to recreate what happens in the biochemist’s beaker (minus the nasty smells) – as well as using Python to model the cooperative binding effects of allosteric proteins.

In which we demonstrate how to parse and interrogate network data using Python sets, and in the process, tame the complex network “hairball”.

In which we introduce the Gillespie algorithm to model biological noise and switches in cells, and use Python to implement it and visualize the results – along with some pretty pictures to delight the eye.

In which we introduce Lindemeyer systems to grow virtual plants and use Python’s implementation of Turtle LOGO. Don’t worry, these plants will not invade your garden (but they might take over your computer).

How the leopard got its spots: Cellular automata models of Turing patterns

In which we use the power of cellular automata to grow some dandy leopard skin pants using Turing’s model of morphogenesis with Python 2D graphics. Note to our readers: no leopards were harmed in the writing of this chapter.

In which we let loose chickens and foxes into an ecosystem and let ‘em duke it out in a state-space that is visualized using Python’s animation features.

In which we create a virtual flu epidemic with agents that have internal state and behaviors. This illustrates an approach in which Python’s object-oriented programming approach really shines.

In which we use the Wright-Fisher model to demonstrate natural selection in action, and show how being the “fittest” doesn’t always mean that you will “win”. Think Homer Simpson winning a game of musical chairs.

Epilogue: Because breaking up is hard to do