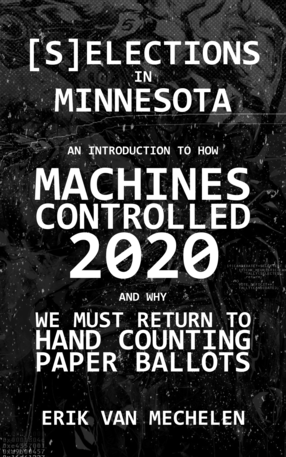 And Why We Must Return to Hand Counting Paper Ballots

Learn the truth about how machines controlled 2020 in Minnesota.

"The highest priority as a bad guy would be to subvert our election system. The reason is: you can take over a country without firing a shot. If you can decide who the leaders are, if you can put judges, if you can answer constitutional questions any which you want, over a period of time—you're not going to do it in one election, it's going to take a bunch of elections—but you can take over a country. And that would be my top priority (as a bad guy). Nuclear weapons would be a close second, but the top one would be elections."

Let’s start with where we are headed.

We are on our way to a future where every voter’s vote is counted and 100% auditable immediately. See this video clip from Col. Phil Waldron in a Nye County Commissioner’s meeting in March 2022 where a resolution was passed by the commissioners 5-0 to remove electronic voting equipment from future elections. (They weren’t the only county in Nevada to do so.)

A win for the enemy is to keep electronic voting machines and systems. We cannot allow that to happen. That is, if you understand the anomalies, indications, and evidence showing what these machines and their code are capable of.

- Conducted with paper ballots, hand counted, that are 100% auditable immediately

Elections should not have:

In Minnesota, the already opaque computer systems are increasingly networked and centralized. When centralized, it is easier for just a few bad actors to control election outcomes.

Those who control the machines, control who wins.

This short book will shine light on exactly how that happens.

This digital version of this book is completely free. If you learn something from it, please share it generously.

This is my seventeenth year living in Minnesota, although my family returned to Stevens County each year in my youth from Texas, Gabon, Louisiana, Indonesia, and China, where my dad's work as a geophysicist brought us. In 5th grade and 7th grade (as secretary) I served in the student council, and was later named or voted captain of several sports teams, including my college soccer team which went to the NCAA tournament. After college, I worked four years in the inventory and software divisions at Target in Minneapolis before investing in myself as a freelance writer for the past eight years. I've assisted governors with a USA Today article and a military veteran with his autobiography, cowrote several books, one a Wall Street Journal bestseller, and helped about 90 authors choose the title of their book.

With a growing understanding of what happened on November 3rd, 2020, life took a turn. After working with grassroots Minnesotans seeking audits, I attended Mike Lindell's Cyber Symposium in Sioux Falls, South Dakota in August 2021. There I met people like Draza Smith, Seth Keshel, Mark Cook, and Col. Phil Waldron and also learned from people like Col. Shawn Smith, Patrick Colbeck, Joe Oltmann, and Professor David Clements. Here in Minnesota, I've continued to absorb much from people like Rick Weible and Susan Smith, as well as from those attending county commissioners meetings in Crow Wing, Dakota, and Sherburne County. Several dozen more men and women could be listed to whom I am grateful.

These experiences and relationships were vital in preparing me to not only make the decision to run for Minnesota Secretary of State, but also to become the servant leader necessary to resolve our election problems, preserve election integrity, and restore confidence to all Minnesota voters that their constitutional right to vote (and to not be disenfranchised of that right) is fully protected.

Outside of learning about elections, I enjoy running, gardening, and playing the piano.

Hebrews 12:1 (KJV) reads "Wherefore seeing we also are compassed about with so great a cloud of witnesses, let us lay aside every weight, and the sin which doth so easily beset us, and let us run with patience the race that is set before us."