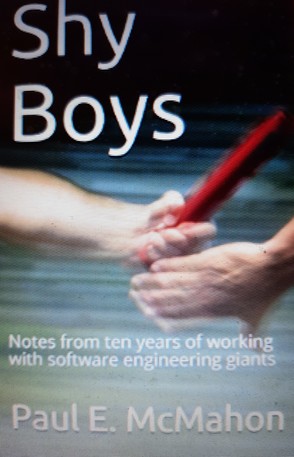 ”A fascinating retelling of one man’s journey to become part of an ongoing and never-ending revolution in software engineering... This serves not only as a warning for those trying to start a revolution in their chosen field, but also as lighter fluid to get the fires burning.” Brent Beckley, Marketing Director, Morgan & Claypool Publishers

This is the story of a small group of people who set out to change the world of software engineering. The initiative became known as SEMAT which stands for Software Engineering Method and Theory.

SEMAT refers to the community of volunteers that developed a new framework referred to as Essence. The initiative was started by Ivar Jacobson, Bertrand Meyer and Richard Soley primarily to address repeating problems observed within the software industry, but its value extends beyond just software as you will learn from this story.

The story begins with the initial SEMAT meeting which occurred in Zurich, Switzerland in March, 2010, and is told from the personal perspective of one of the participants who subsequently became deeply involved in the initiative over the following ten years.

There are multiple reasons why I wrote this book. First, this book is a compilation of stories from my personal notes intended to provide insight into the motivation, challenges and thinking behind Essence. Second, I share with the reader information about some of the principle people who structured and influenced the SEMAT effort. Third, I share reflections on events that shaped the evolution of my thinking on this journey.

In its simplest form Essence can be thought of as a thinking framework-- or a mental model practitioners can keep in their head to guide their daily decisions.

Prior knowledge of SEMAT and Essence is not required to understand the stories in this book. However, for those interested in learning more, references are provided in Chapter Seven.

The intended audience for this book is information technology professionals including software developers, testers, systems engineers, analysts, project and organizational managers/leaders, support personnel and those involved in education and research.

The title of this book was chosen based on a phrase Ivar Jacobson often used when conversing with the author during our many meetings which occurred between 2010 and 2019.

When I started to write this book I did not know exactly where the story would go. One of the reviewers of this book observed that I spoke a great deal about the significance of emotion throughout the book. The cover of the book showing a runner handing the baton to a teammate was chosen because it is a critical moment in track that is essential to a relay team being successful.

The stories in this book reflect the author's recollection of events. Some names, locations, and identifying characteristics have been changed to protect the privacy of those depicted. Dialogue has been re-created from memory.

Essence was adopted as an official Object Management Group (OMG) standard in June, 2014. The mission of the OMG is to provide technology standards that provide real-world value.

What people are saying about "Shy Boys"

”A fascinating retelling of one man’s journey to become part of an ongoing and never-ending revolution in software engineering. The stories of the people, places, and ideas involved in the revolution are coherent and interesting, especially some of the big personalities who were involved, or refused to be involved. This serves not only as a warning for those trying to start a revolution in their chosen field, but also as lighter fluid to get the fires burning.” Brent Beckley, Marketing Director, Morgan & Claypool Publishers

“You've made the seemingly ‘untouchables’ in our industry, reachable. You made them more human.” Elaine Harmon, Senior Program Manager, Aviation Systems, L3Harris Technologies

“’Shy Boys’ is a collection of stories written from one man’s perspective as a member of a volunteer team that developed a new software engineering standard, referred to as Essence. One of those stories that struck me, as I reviewed the book, relates to the development of the Essence checklists.

As I read this story, I reflected on the fact that to place oneself in the shoes of another is difficult. It requires commitment, empathy, and a willingness to silence one’s own thoughts to better understand those of another. It is in this context that I consider the fact that the Essence checklists took two years to develop. Reviewing the checklists, it is amazing that something so straight-forward would have taken more than a month, or less, to create. But herein lies the rub. Creating a checklist with a single culture in mind may be a snap because we have grown up in that culture; it is familiar and pervasive.

But to consider those cultures with which we are unfamiliar that come from many other countries around the world requires a trait not well formulated in the human being: listening.

The fact that it only took two years to create the checklists is remarkable!  So how did the Essence team manage to do this?

The simple fact you learn from this book is that anything is possible if a team commits to listening, discussing, and reaching a solution that works for the common good. The creation of the Essence checklists proves that human beings from different parts of the world and different cultures can develop a product that has a strikingly powerful impact on and within an industry.

When you read the stories in ‘Shy Boys’ you also learn that those involved were willing to check their ego’s at the door and listen to try their best to understand viewpoints different from their own. While there are many stories worth learning from this book, the overarching story about how a small group of people from different parts of the world came together to produce a simple product that captures the “essence” of successful software engineering makes this book a must read for all IT professionals.” John Troy, Program Manager (Retired) Rockwell-Collins

“As professionals, software engineers need to know what’s going on in their profession beyond just the latest tools and techniques. If they don’t keep up, they run the risk of falling behind which could be considered malpractice in an industry that moves ‘at the speed of light.’

‘Shy Boys’ provides a window into the motivation and thinking behind the new software industry Essence standard. Essence isn’t just another tool or technique.  As you learn from this book, it is a practical thinking framework software professionals can employ to aid daily decision-making. As an operations management consultant it also struck me when reading ‘Shy Boys’ that the lessons could easily be extended beyond software to aid in solving common operations challenges, such as those often faced by my own clients.” Jim Grebey, President, Diligent Inc.

“I had the opportunity and pleasure to read ‘Shy Boys’ and thoroughly enjoyed it for its approach, candor, insight and openness in telling the behind the scenes story of SEMAT and the development of the Essence Model.

I learned from an early age that there are two kinds of people in the world: Dreamers and Doers. This book by Paul McMahon tells a story of both kinds of people working together to define and develop a simple and practical framework to help software teams succeed by focusing on guided critical-thinking. The reader learns through the story about the software industry giants who provided their vision and theories and the volunteers from around the world who carried that vision forward. Paul takes on the Herodotus role to describe and detail the 10 year span of time with the many personalities involved in the Essence model creation.

I suppose I should provide full disclosure and actually admit that I not only read ‘Shy Boys’, but re-read it 3 more times, and each time walked away with a new pearl of wisdom or insight regarding how I might use this model in my previous roles as a  process improvement lead, a professional military fighter pilot, and even now as a commercial airline Captain.

‘Shy Boys’ leads the reader along a path of discovery.  By the end of the book, this reader discovered that the great vision was achieved by people like you and me who “stood on the shoulders of real giants.” The book captures the thoughts, insights, questions and even the quirks related to how the SEMAT volunteers worked to create the final Essence product. I guarantee you will re-read this short book more than once.  Enjoy 'Shy Boys' and Thank You Paul for writing it!” Michael Oakes, PhD, Former Process Improvement Team Leader, Alion Science and Technology

Paul E. McMahon (pemcmahon@acm.org), Principal, PEM Systems (www.pemsystems.com) has been an independent consultant since 1997 helping organizations increase agility and performance. Paul's current focus is on coaching teams in practical techniques to solve their own challenges using the Essence framework (www.essence-in-use.com). He has taught software engineering at Binghamton University, conducted workshops on engineering processes and management and has published more than 50 articles and multiple books including "Integrating CMMI and Agile Development: Case Studies and Proven Techniques for Faster Performance Improvement," and "15 Fundamentals for Higher Performance in Software Development," and "It's All Upside Down: What I've Learned About Software Development and Why it Seems Opposite to Everything I was Taught." Paul is a co-author of "The Essence of Software Engineering: Applying the SEMAT Kernel." Paul is a Certified Scrum Master, Certified Lean Six Sigma Black Belt, and a Certified Essence Training Provider. His insights reflect 24 years of experience working for companies such as Link Simulation and Lockheed Martin, and 20 years of consulting/coaching experience. Paul has been a leader in the SEMAT initiative since its initial meeting in Zurich in 2010. 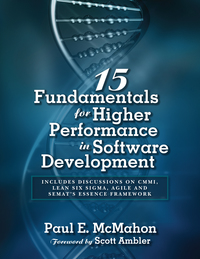 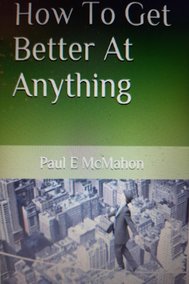 How To Get Better At Anything
Paul E. McMahon 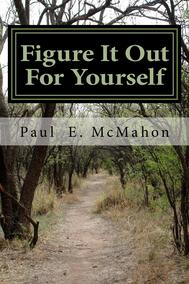 Figure It Out For Yourself
Paul E. McMahon 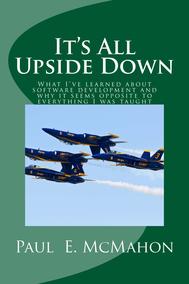 It's All Upside Down
Paul E. McMahon 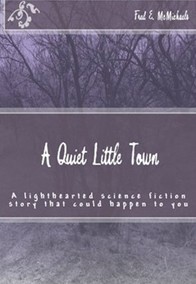