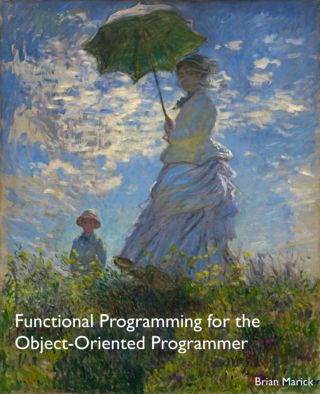 Functional Programming for the Object-Oriented Programmer

Functional Programming for the Object-Oriented Programmer

The book uses Clojure, a popular functional language that runs on the Java Virtual Machine. It contains many exercises and their solutions.

For more about what the book covers, see the sample PDF. It includes the Introduction, the first chapter, and the glossary.

The book is "feature complete", but there will be bug fixes and improvements to the explanations over the next few months.

"This book, written by Brian Marick, is important. Indeed, it may be necessary. We need something to bridge the gap between the huge population of OO programmers, and the growing need for functional programmers. I’ve seen nothing else that fills this need so well."

— From a review by Robert "Uncle Bob" Martin

"@marick is blowing my mind with #fp_oo, building OO on top of FP."

"'Functional Programming for the OO Programmer' by @marick features the best introduction to Clojure I've read so far."

"Bought #fp_oo by @marick today. Chapter 1 is the best #clojure intro I have read"

This package is for up to 5 copies of Functional Programming for the Object-Oriented Programmer.

This package is for up to 15 copies of Functional Programming for the Object-Oriented Programmer.