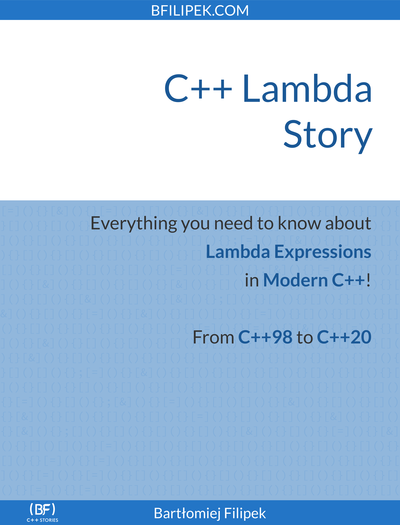 Everything you need to know about Lambda Expression in Modern C++!

This concise and practical book reveals all the aspects of one of the most powerful Modern C++ features. Learn how lambdas evolved, understand how they work and see their future changes.

This book shows the story of lambda expressions. We'll start with C++03 and a motivation to have "ad-hoc" functors, and then we'll move into the latest C++ standards:

The book is based on two articles that appeared at bfilipek.com:

The articles also are inspired by a live coding presentation given by C++ Expert Tomasz Kamiński at our local Cracow C++ User Group.

The book contains updated code examples, new sections and better in-depth descriptions. All the new additions make it twice the size of the initial material that is available on the blog!

Below, you can find the GoodReads page for the book with the readers' feedback:

Bartłomiej (Bartek) Filipek is a C++ software developer with more than 12 years of professional experience. In 2010 he graduated from Jagiellonian University in Cracow, Poland with a Masters Degree in Computer Science.

Since 2011 Bartek has been regularly blogging at bfilipek.com. Initially, the topics revolved around graphics programming, but now the blog focuses on core C++. He's also a co-organiser of the C++ User Group in Cracow. You can hear Bartek in one @CppCast episode where he talks about C++17, blogging and text processing.

Since October 2018, Bartek has been a C++ Expert for the Polish National Body which works directly with ISO/IEC JTC 1/SC 22 (C++ Standardisation Committee).

In his spare time, he loves collecting and assembling Lego models with his little son. 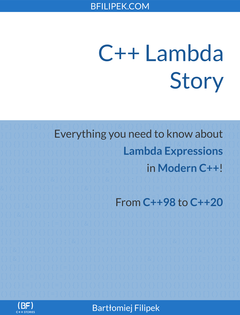