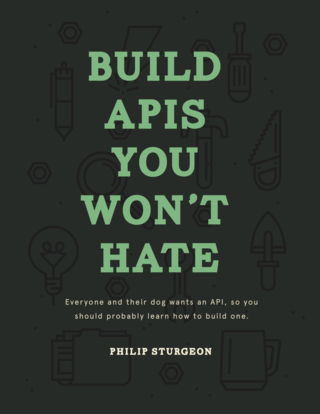 Phil Sturgeon
Tasked with building an API for your company but don't have a clue where to start? Taken over an existing API and hate it? Built your own API and still hate it? This book is for you.
$26.99
Minimum price
$29.99
Suggested price

An Interview with Phil Sturgeon

Alex knows his stuff about APIs. Previously working at the University of Lincoln he used to build out OAuth-based APIs for them. Then he moved to @VideoGamerCom and is doing the same for them, at a very high level. Alex also created the OAuth 2 PHP Server used in the later chapters, so is the perfect person to help out with technical review.

Ashley is an absolute champion of an editor. She has gone through my book a bunch of times, pointing out all my grammatical flaws with a big red marker, getting the book up to scratch enough for it to go to print!

Ben helps out at Kapture now and then as a freelancer and took care of our original Behat testing. I gave him the vague plan for how I would like our Behat tests to run and he coded it up. He is responsible for the majority of the FeatureContext.php bundled in the Sample Code.

A nationwide network of volunteer-led after school coding clubs for children aged 9-11.

We create projects for our volunteers to teach at after school coding clubs or at non-school venues such as libraries. The projects we make teach children how to program by showing them how to make computer games, animations and websites. Our volunteers go to their local club for an hour a week and teach one project a week. Each term the students will progress and learn more whilst at the same time using their imaginations and making creative projects. Terms 1 & 2 use Scratch to teach the basics of programming. Term 3 teaches the basics of web development using HTML and CSS. Term 4 teaches Python and so on. We’d like to put a Code Club in every single primary school in the country. There are over 21,000 primary schools in the UK, it’s a big task but we think we can do it!