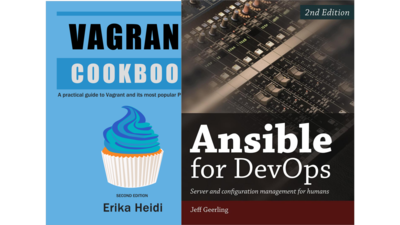 Unveil the power of Ansible and Vagrant with this bundle at a special price. You'll have everything you need to get started with Vagrant - learn the basics and how to create your virtual development environments, using Ansible as provisioner!

Vagrant Cookbook is a complete guide to get started with Vagrant and create your custom virtual development environments. You'll never be a victim of the "works on my machine" statement again! This book covers from the very basics to advanced features on Vagrant, like running multiple VM's and using Vagrant Share to share your virtual environment with people around the world. It will give you a quick overview about the main provisioners used with Vagrant: Puppet, Chef, and Ansible.

Erika Heidi is a web developer and eventually a devop, working and researching Vagrant since 2013, in order to create better development environments that can be easily shared.

About Ansible for DevOps

Ansible is a wonderful automation tool, simple, but very powerful.This book will help those familiar with the command line and basic shell scripting to get started with Ansible, and to provision and manage anywhere from one to thousands of servers. Everything is explained with pertinent real-world examples, often using Vagrant-managed virtual machines.

Jeff Geerling is a developer who has worked in programming and devops for companies with anywhere between one to thousands of servers. He also manages many virtual servers for services offered by Midwestern Mac, LLC, and has been using Ansible to manage infrastructure since early 2013.

With this bundle, you will have everything you need to create advanced environments for Vagrant using Ansible as provisioner. You will be able to use Ansible for deployment and management of one to thousands of servers. All with a very special price! 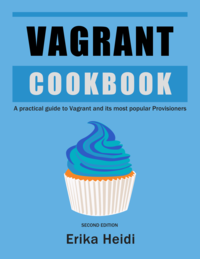 A practical guide to Vagrant

How many times did you hear the sentence "it works on my machine"? With Vagrant, this excuse won't cut anymore. Your environments will be exactly the way you want them to be, targeting specific projects for different needs. Portable, disposable and reproducible. As easy as cloning a repository and running "vagrant up".

This book covers from basic to advanced concepts on Vagrant, including important ProTips to improve your Vagrant projects and to avoid common mistakes. It is updated to cover recent features like Vagrant Share and Vagrant Push.

Vagrant Cookbook comes with quick guides to 3 of the most popular configuration management tools out there, which can be used as provisioners for Vagrant: Ansible, Puppet and Chef. Following the guide, a practical example will show you how to provision a basic web server running Nginx with PHP 7. Choose the tool you like the most!

The complete provisioner examples are available for free on GitHub.

Thanks to the LeanPub platform, when buying this book you'll get lifelong updates at no extra cost. For any new content / corrections, you will be notified to download the newest version.

If you prefer a printed version (paperback) rather than an ebook, you can get it here: http://www.lulu.com/shop/erika-heidi/vagrant-cookbook/paperback/product-21809746.html . As a downside, you won't be getting future updates as with the Leanpub version. 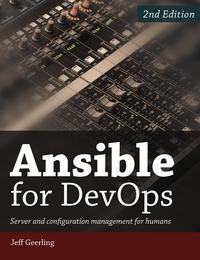 Server and configuration management for humans

Ansible is a simple, but powerful, server and configuration management tool (with a few other tricks up its sleeve). This book helps those familiar with the command line and basic shell scripting start using Ansible to provision and manage anywhere from one to thousands of servers.

The book begins with fundamentals, like installing Ansible, setting up a basic inventory file, and basic concepts, then guides you through Ansible's many uses, including ad-hoc commands, basic and advanced playbooks, application deployments, multiple-provider server provisioning, and even Docker orchestration! Everything is explained with pertinent real-world examples, often using Vagrant-managed virtual machines.

Examples in the book are tested with the latest version of Ansible.