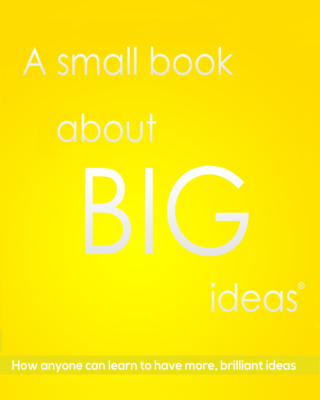 A small book about BIG ideas

A small book about BIG ideas

How anyone can learn to have more, brilliant ideas

Millions of lines have been written about ideas and innovation and if you were to sit down to read them all you’d be sitting down for months. I can confidently say this because I have read just about all of them! (I have included an essential reading list at the end of the e-book).

There’s some wonderfully insightful reading to be done, but there’s a whole lot of intellectual babble as well. I’ve called this book the small book about BIG ideas not because I’m lazy (although I am short of time) but because I want to give as many people as possible the opportunity to pick-up some ideas (excuse the pun), insights and techniques to have more better ideas.

Michael Allen is the co-founded TalkFreely Limited, one of the European leaders in Innovation Management software. He blogs extensively on Social Innovation and has helped organisations like Computacenter, Save the Children, Amey and Ferrovial innovate.

Prior to TalkFreely, Michael joined a software start-up called Nimbus Partners as employee no. 3 and was the top business developer every year until leaving in 2005. Nimbus provided an process and improvement platform and prior to that founded the UK’s first online photo processor, Fotango.com and built the business from scratch winning deals with major players such as ebay.co.uk and e-weddings.co.uk. After gaining £4m in Venture Capital funding the business was sold to Canon Europe