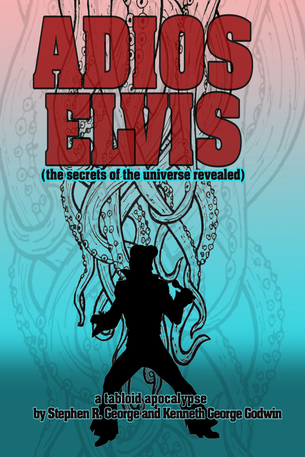 or The Secrets of the Universe Revealed

What do Elvis, H. P. Lovecraft, Cthulhu, the Elder Gods, Orgone Energy, a North Dakota saucer crash, a dimension-hopping nymph, the West Hawk Lake monster, and spontaneous human combustion have in common? Intrepid paperback original writer Willard Baxter is about to find out.

When author Willard Baxter, a professional skeptic, is assigned by his publisher to dig into the stories behind supermarket tabloid headlines, his life begins to unravel. Within days he is involved in deranged Nazi Occultism, facing a deadly Orgone Blaster, and digging himself out of the aftermath of a North Dakota saucer crash.  Is everything the tabloids have been writing about for decades true? Or has his mind become unhinged? The lunatic fringe he has been investigating is beginning to seem a little too much like home. And now a dimension-hopping nymph is leading him toward a portal that may, or may not, lead to the underworld. Can Baxter get himself out of this fix before he joins Elvis in the great dimension beyond?

Critic and filmmaker Kenneth George Godwin lives in Winnipeg, Canada, where he writes extensively about film on his website, CageyFilms.com, and directs and edits documentaries.

Stephen R. George writes under his own name and the pseudonyms Jack Ellis and Valerie Stephens. His first novel, Brain Child, was published in 1989, by Zebra Books, New York. It was followed that same year by Beasts, then Dark Miracle. George quickly became a stalwart of the Zebra Books horror stable, writing and published a total of 14 books through the 1990s. His novels have been translated into Italian, Polish, Romanian, and Norwegian. His shorter works have appeared in a number of publications and anthologies including Cemetery Dance, the Hot Blood series, Deadbolt Magazine, Science Fiction Chronicle, Horror Library and more. George was born in Scotland in 1959; he lives and works in Canada.