Charles Scalfani has been developing software for 40 years. He started back in the days when people programmed in Assembly Language on 8-bit microprocessors. He worked on the firmware for one of the first audio cards for a PC and subsequently used it to develop a service for Record Companies for a touchscreen-based point-of-sale kiosk that was installed in Tower Records stores all over the country called the Music Sampler.

During the following decade, Charles developed one of the first digital ink-and-paint systems, Annie, at an Oscar-winning Hollywood studio. His software was used to produce animated commercials and cartoons, most notably, Ren and Stimpy for Nickelodeon and Beavis and Butthead for MTV.

Thereafter, he and 5 coworkers formed a production studio, Class6 Entertainment, where he worked on a new Animation Production system and Game Runtime Engine that was used to produce the CD-ROM game, Creature Crunch, starring Martin Short and Eugene Levy.

Since then, he’s been working mostly in traditional businesses from process control, automation, point-of-sales, dot-com, consulting, and manufacture monitoring, where he created a Patented process for tracking contaminated milk in dairy plants.

He’s currently the CTO for Panoramic Software where he and a team of developers recently created a system that helps Veteran Service Organizations more efficiently help Veterans file benefit claims, a potentially life-saving endeavor. Panoramic uses Elm, PureScript and Haskell, which are all Functional Programming Languages, the subject of his most recent book.

An Interview with Charles Scalfani 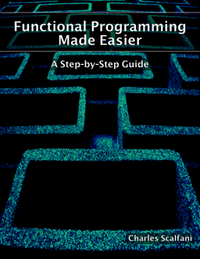