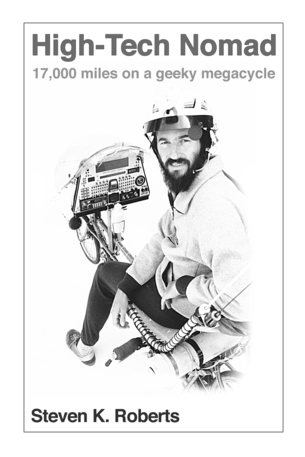 17,000 Miles on a Geeky Megacycle - Computing Across America

This book is 33% complete

Steven K. Roberts
From 1983 to 1991, I pedaled around the US on a computerized recumbent bicycle while living in the emerging online networks... in the process becoming the first "technomad" and sparking fascination with mobile connectivity. This huge book is packed with gizmological details, massive cultural shifts, road stories from the sexy to the bizarre, and the stuff of geek fantasy. Includes Computing Across America, Miles with Maggie, Nomadness journals, BEHEMOTH Bikelab Reports, & technical details.

This book has been three decades in the making... beginning in 1983, a time of primitive computer and communications technologies. Cellular phones did not yet exist, online services cost a few dollars an hour for cumbersome text-only services, and people were debating whether one could actually work at home instead of the office.

I was on a quest for geek adventure fueled by publishing, a way to combine all my passions into a nomadic lifestyle. I hit the road on a recumbent bicycle with solar-powered portable computer and a CompuServe account. But what's this? Nonstop media coverage? I was onto something...

In 1985 I wrote a book (Computing Across America) about the first 10,000 miles, then set to work on a new bike that would allow me to write while riding, exchange email via packet radio, remotely monitor the system, carry more solar panels, operate ham radio, and so on. This new machine carried me another 6,000 miles, covering both coasts of the US with my girlfriend of the epoch (riding her own recumbent), leading to another book-length collection of tales from the road that have never been properly published. The geekspedition was becoming a career.

OK, one more time. By late 1988, I was getting excited about ever more seductive gizmology, so decided to do it again... an extravaganza of gonzo engineering.

This final bike rolled out of the lab in 1991. Dubbed BEHEMOTH (Big Electronic Human-Energized Machine... Only Too Heavy), it was a 3.5-year project based in Silicon Valley, supported by about 140 corporate sponsors and 45 volunteers. It was intense, complex, and had an estimated value of $1.2 milion. The 580-pound bicycle had 105 speeds, and carried fluid helmet cooling, pneumatically deployed landing gear, handlebar keyboard, ultrasonic head mouse, heads-up display, console Macintosh, two embedded PCs, a laptop, SPARCstation for that new Internet, audio and serial crosspoint switches, cellular phone with modem/fax/voicemail, speech synthesis and recognition, a robust multimode ham radio station, satellite net connection, security system, navigation tools... and lots of other goodies.

The project itself became the story, with a community of übergeeks converging nightly at the Bikelab hosted by Sun Microsystems, combining their wizardry into something marvelous and insane... while the media coverage went global.

This book covers the whole epoch, beginning with the simple idea of technomadic adventure that launched me from Ohio in 1983, and continuing through all the system integration and envelope-pushing experiments... including the final 1,000 road miles in 1991. It is packed with photos, naughty tales, geek interludes, philosophical maunderings, moments of pure terror, random hilarity, hacks, close-up glimpses of our changing culture, and some extremely colorful characters. I have been wanting to write this book for over 20 years, and at last the tools have become available to make the process reasonably painless. It is estimated to weigh in at roughly 1,000 pages, and will be available in the three major eBook formats (PDF, EPUB, and MOBI) as well as print-on-demand. The book is supported by a web archive of articles, videos, and additional tech detail... and interleaved crosslinks allow the reader to easily follow separate threads through the book if desired (adventure narrative vs deep geekery). It includes full text of the long-out-of-print Computing Across America, which enjoyed a cult following in the '80s... but now with dozens of color photos and interleaved tech notes.

If this sounds intriguing, please sign up with the gadget on this page (the box asking what you would pay is not a commitment, just data to help me decide on a cover price... leave it blank if you prefer). You will be notified when the book is far enough along to start being published, then through the magic of Leanpub I will continue adding to it with version releases every few chapters until it's done. In the meantime, I have made a free sample edition (4.3 MB PDF, 31 pages) with three chapters, and will periodically swap them out while working on the book. There is also a Facebook page corresponding to the book, with lots of photos and snippets of the story. Please join us!

Cheers from Nomadness (a 44-foot sailboat in the San Juan Islands)...

Since 1983, I have devoted all available resources to the pursuit of adventure, geek expressionism, and gonzo engineering. The merger of these three obsessions has fueled a playful life of building and traveling with technomadic contraptions, writing about everything from the underlying tech to the romance of the road. Somehow, this became a career. (Before all this, I did real work, including building embedded systems for a few years and writing a textbook about industrial microprocessor design, but life in suburbia inspired long-distance travel... and traditional career plans fell by the wayside.)

After a decade building and pedaling three versions of the computerized recumbent bicycle that is the star of this book, I spent another decade building an amphibian pedal/solar/sail micro-trimaran... while 580-pound BEHEMOTH, the final incarnation of the bike, became a permanent exhibit at the Computer History Museum.

I now live with my cat aboard a 44-foot steel sailboat named Nomadness, and have been working on converting her into a starship with on-board R&D lab, data collection and telemetry tools, extensive communications gear, and a piano.

Details about these and other projects may be found at Nomadic Research Labs, and there is a timeline of hundreds of articles and videos linked from within this book.