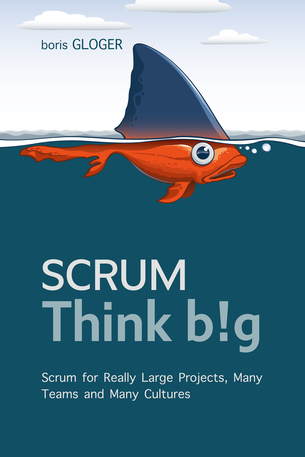 Scrum for Really Large Projects, Many Teams and Many Cultures

Your travel guide for implementing Scrum. This book will help you understand what you are getting yourself into. But be aware - only you can start the journey.

Many employees at several locations should collaborate on a project using agile processes – what needs to be taken into consideration for this? Scrum has long been established as a method for successful product development in small teams, but now should be applied to a larger dimension. Under pressure from digitalization, even corporations are beginning to apply their experiences from agile pilot projects to larger parts of their organization. Agile Scaling frameworks promise quick and easy solutions, but these prefabricated structures do not achieve the actual goal: an agile company. In this book, Boris Gloger describes an alternative solution based on his own experiences. When scaling Scrum, it isn’t about multiplying a method. It’s about taking a new perspective on the large project and seeing it as a fractal-scaled organization. What is required are decoupled product architectures, consistently thinking from the customer’s perspective, a project management office acting as a prudent ScrumMaster and a desire to learn new skills, all supported by modern infrastructures. And finally, it needs leadership who realizes their most important duty is to enable collaboration across all levels.

This book is a translation into English of Scrum think b!g which was originally written in English.

Boris Gloger is a German Scrum pioneer and opinion leader for new forms of working. With his management corporate consultancy borisglogerconsulting, he not only supports DAX® and ATX companies with agile organization management, but also drives new ways of working in his own company’s daily business. In 2002 he successfully led his first Scrum team at the Austrian ONE (later called Orange Austria Telecommunication). From that point on, he has been playing a leading role in establishing Scrum as the standard in agile software development in Europe, South Africa and in Brazil.

He is the author of several specialist books on the topics of agility and Scrum and has educated more than 5000 managers and teams in Scrum until today. As the first certified Scrum Trainer in Germany, he has been passionate for that framework for almost two decades.