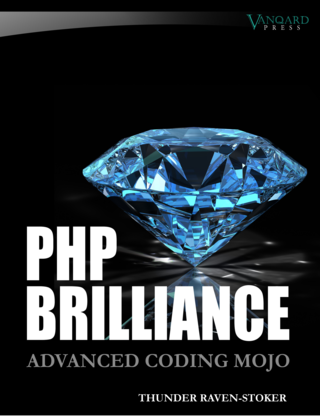 PHP Brilliance (Get the book)

This book is packed with all of the key advice that you need to help you become a top tier PHP developer.

It's based on years of development experience and features in-depth discussions of the essential software development topics that you need to master in order to create reliable, efficient and bug resistant code.

It is the essential guide to help you exhibit PHP Brilliance.

Page after page, we'll take a look at all of the core ideas that will help a developer shine and stand out from the crowd. We'll reconsider the fundamentals and how they mesh with popular programming principles. We'll take a look at some of the more recent additions to the language and how we can leverage them effectively.

There's a hearty section that delves in the SOLID principles, pulls them apart and examines how they apply to building enterprise grade applications. There's also quite a few ideas of my own in there for us to look at and think about.

By pre-emptively acquiring the right knowledge, a programmer may accelerate their own personal development towards mastery and the production of high quality code. In turn, common bug-prone scenarios may be avoided and highly valuable pub time preserved. - morepubtime.com

PHP Brilliance uses the More Pub Time Principle as its unifying theme, aiming to present you with the right knowledge that you need to become that top tier PHP developer.

An approach to coding that encourages the creation of beautiful, reliable, maintainable and efficient software. One that that fills out the developer's mental toolbox in such a way as to avoid bug-prone scenarios in their code both today and in the future.

One that promotes the preservation of highly valuable pub time.

Amazon Watch is a nonprofit organization founded in 1996 to protect the rainforest and advance the rights of indigenous peoples in the Amazon Basin. We partner with indigenous and environmental organizations in campaigns for human rights, corporate accountability and the preservation of the Amazon's ecological systems.

We envision a world that honors and values cultural and biological diversity and the critical contribution of tropical rainforests to our planet's life support system. We believe that indigenous self-determination is paramount, and see that indigenous knowledge, cultures and traditional practices contribute greatly to sustainable and equitable stewardship of the Earth. We strive for a world in which governments, corporations and civil society respect the collective rights of indigenous peoples to free, prior and informed consent over any activity affecting their territories and resources. We commit, in the spirit of partnership and mutual respect, to support our indigenous allies in their efforts to protect life, land, and culture in accordance with their aspirations and needs.