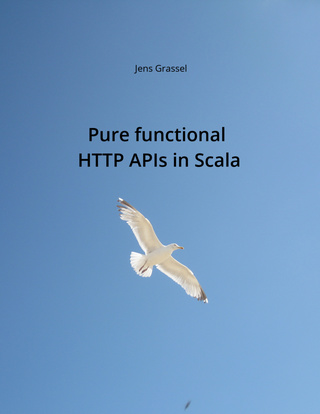 Discover the pure functional side of HTTP API programming in Scala.

This book is intended for the intermediate Scala programmer who is interested in functional programming and works mainly on the web service backend side. Ideally she has experience with libraries like Akka HTTP and Slick which are in heavy use in that area.

However maybe you have wondered if we can't do better even though aforementioned projects are battle tested and proven.

The answer to this can be found in this book which is intended to be read from cover to cover in the given order. Within the book the following libraries will be used: Cats, Cats Effect, http4s, Doobie, Refined, fs2, tapir, Monocle and probably others. ;-)

The second edition includes a chapter about migrating the project to Scala 3.

Code and book source can be found in the following repository: https://github.com/jan0sch/pfhais

Jens Grassel is the CTO and founder of Wegtam, a company specialised in data integration and search technology. He is programming in a plethora of languages and engineering software systems since the fall of the Wall. For some years now his focus has shifted to functional programming languages.

He has contributed to numerous free software projects and likes to apply free and open source technologies wherever applicable.

Of course it runs NetBSD

NetBSD is a free, fast, secure, and highly portable Unix-like Open Source operating system. It is available for a wide range of platforms, from large-scale servers and powerful desktop systems to handheld and embedded devices.

The NetBSD Project is an international collaborative effort of a large group of people, to produce a freely available and redistributable UNIX-like operating system, NetBSD. In addition to our own work, NetBSD contains a variety of other free software, including 4.4BSD Lite2 from the University of California, Berkeley. One of the primary focuses of the NetBSD project has been to make the base OS highly portable. This has resulted in NetBSD being ported to a large number of hardware platforms. NetBSD is also interoperable, implementing many standard APIs and network protocols, and emulating many other systems' ABIs. The NetBSD Foundation is incorporated in the United States as a tax-exempt corporation (under Section 501(c)(3) of the US Internal Revenue Code) that devotes itself to the traditional goals and spirit of the NetBSD Project and owns the trademark of the word “NetBSD”.