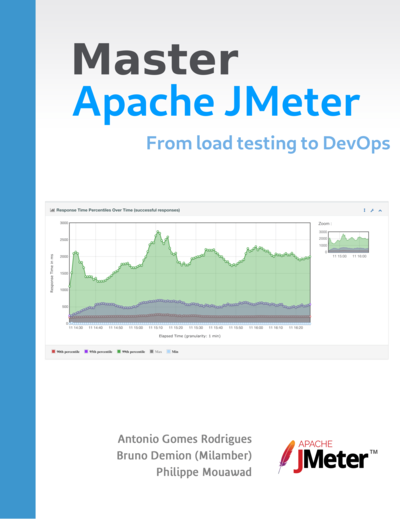 Master performance testing and JMeter with this book written by three members of Apache JMeter's team who are also experts in the performance field.

You will deeply understand how to get the most out of it, be more productive and integrate it into your Agile/DevOps processes.

Throughout the chapters, you will understand how to create meaningful performance tests, discover the richness of JMeter and learn how to use it efficiently and effectively.

From automatic recording that allows you to gain in productivity and realism in writing your scripts, through correlation that makes your test realistic and reusable across environments, the authors put you on the right track to realize your scalability testing campaigns.

They then explore the different protocols offered by the tool through examples drawn from their professional experiences.

Finally, they show how to integrate the tool into the DevOps approach, create professional reports and exploit the richness of its eco-system to integrate new protocols, enrich its monitoring or leverage its power through the use of the Cloud.

Antonio Gomes Rodrigues is an expert in the field of application performance for more than 10 years.

His missions led him to work:

He shares his knowledge of application performance at conferences, on his blog and during technical book reviews.

Philippe Mouawad is a technical expert and architect in J2E and Web environments within the company Ubik-Ingenierie.

He has been using JMeter since 2009 as part of performance improvements missions, load testing of intranet or e-commerce websites and trainings on JMeter.

He has been contributing to JMeter since 2009 first through patches and then as a 'committer' and member of Project Management Committee at Apache.

Among his main contributions, the CSS selector Extractor, the Boundary Extractor, the Backend Listener (allowing to interface among others Graphite, InfluxDB or ElasticSearch),

part of the Web reporting feature and the optimization of the performances of the core, its stabilization and various ergonomic improvements, to his credit more than 400 bugs/improvements.

He also contributes to the JMeter-Plugins project, among his contributions are Redis DataSet, Graphs Generator Listener and various patches to different plugins.

He also manages the JMeter Maven Plugin project, he has been managing it since version 2.3.0 ensuring its compatibility with last JMeter releases and improving its

His Apache ID is pmouawad.

He is also a lead developer of the Ubik Load Pack solution, a set of Enterprise Plugins which provides support for protocols that are not natively supported by JMeter.

Finally, he contributes to the Ubik-Ingenierie blog.

Bruno Demion, better known as Milamber, is a French computer scientist expatriated in Morocco since 2002, currently living in Témara (near Rabat).

He works in a technology consulting and expertise company as a partner, senior technical expert and technical architect.

Through his work and passion for IT, Milamber has strong skills in performance, troubleshooting, security and technical architectures around web technologies.

Since December 2003, he has been working with JMeter to perform load tests in various missions and training courses.

He contributes as much as possible to the JMeter project in his spare time, in particular on the translation into French of the graphical interface, corrections of anomalies as well as some behaviors (proxy https, new results tree, icon bar, etc.).

He is currently a committer, PMC member and the PMC Chair of the Apache JMeter project within the Apache Software Foundation - ASF. He is also an official ASF member. His Apache ID is milamber.

Milamber also has a personal blog with many articles and tutorials on Apache JMeter, some of which inspired this book.

This package is for 3 copies of the "Master JMeter : from load testing to DevOps" at a 25% discount.

Board director for the Computer Measurement Group (CMG), a worldwide organization of performance and capacity management professionals.

Currently he is Consulting Member of Technical Staff at Oracle, responsible for performance testing and tuning of Hyperion (a.k.a. Enterprise Performance Management and Business Intelligence) products. Before specializing in performance, Alex led software development for Rodnik Software.

Having more than thirty years of overall experience in the software industry, he holds a PhD in Computer Science from Gubkin University and an MBA from Bellevue University.

Alex periodically talks and writes about performance-related topics, advocating tearing down silo walls between different groups of performance professionals. He currently serves as a board director for the Computer Measurement Group (CMG), a worldwide organization of performance and capacity management professionals.

He has a diploma in mathematics, but found working in IT more appealing.

He really likes to work with open source, as it gives him the ability to dive into the inner workings of those magic things.

A must have for every software tester working with JMeter

The book provides an impressive amount of knowledge on how to successfully use JMeter, from your first steps with the tool to its integration in a DevOps approach. ... This book is naturally a must have for every software tester working with JMeter, but it will also provide valuable knowledge and solution to every software tester or developer concerned with the performance of her or his application. Read full review at http://www.softwaretestingmagazine.com/knowledge/master-apache-jmeter/

This book fills in the details for many of the problems that JMeter users run into - which is practical advice on how to use the various components of the extensible JMeter ecosystem. This book is a very good resource to developers and testers who have some exposure to testing and are now looking to get into the more advanced JMeter features and using tools that JMeter integrates with.

As an active member of the community & a seasoned JMeter user, I believe this book should be a must have for any JMeter user-beginner or expert. As a beginner, it will show you all of what you need to know to successfully establish meaningful test scenarios. As an advanced user, it will be a nice reminder of what really should be in your tests as well as making you discover some JMeter features you've never really used. I highly recommend it to anyone involved in performance testing/engineering. 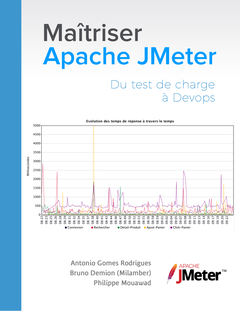