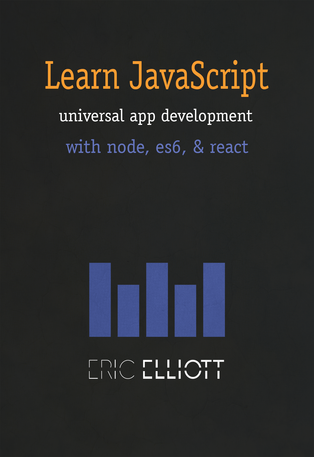 One App for Mobile, Web, & Servers with Node & React

Eric Elliott
Node.js, Facebook's React, ES6, & universal JavaScript are taking over. This book will bring you up to speed on a new style of JavaScript application development with Node and React, a front-end component library in production use at Facebook, Instagram, Netflix, and the next generation of software startups. If you've learned a little JavaScript and you're ready to step up your game and build something inspiring, this book is for you.

Node.js, Facebook's React, ES6, & universal JavaScript are taking over. This book will bring you up to speed on a new style of JavaScript application development with Node and React, a front-end component library in production use at Facebook, Instagram, Netflix, and the next generation of software startups.

Universal (aka "isomorphic") means that it's designed to run a lot of the same code on both the client and the server. Typically that includes a lot of rendering and domain logic.

Node is a JavaScript platform that combines Google's V8 JavaScript engine with powerful asynchronous programming and first class networking features. It has recently exploded as the favored platform for building web service architecture, including microservices, web servers, and realtime networking layers. Learn what makes Node a clear choice on the server, as well npm and front-end application build tools.

React is a UI component framework built by Facebook and used in production by Instagram, Netflix, PayPal, AirBnB, Uber, and a whole lot more. Learn how React speeds up render performance using virtual DOM diffs and atomic updates, and how react manages events with automatic event delegation and synthetic events.

We'll also explore the flux architecture, immutable stores, and time-travel debugging, a feature that will make you wonder how you ever got by without it.

The Two Pillars of JavaScript

Software is eating the world, the web is eating software, and JavaScript rules the web. Learn why JavaScript's distinctive features make it well suited to its position as the most popular programming language in the world.

ES5 brought functional Array extras to JavaScript. You've probably had a chance to use features like.map(), .filter(), and .reduce(), but there's a bit more you should know about functional programming. Learn about the significance of immutability, function composition, functors, currying and more as we explore functional programming in JavaScript and its relationship to reactive programming with libraries like RxJS and React.

The two pillars are essential concepts to learn because they're widely used in industry leading apps from companies like Facebook, NetFlix, Instagram, PayPal, and Microsoft. Why not put them to work for you, too?

Stop rewriting the same boilerplate for every app and every new service you write. We'll explore the current state of the app ecosystem:

A lot has changed since "Programming JavaScript Applications". This book will bring up up to date.

Eric Elliott is the author of “Programming JavaScript Applications” (O’Reilly), host of the documentary film-in-production, “Programming Literacy”. He has contributed to software experiences for Adobe Systems, Zumba Fitness, The Wall Street Journal, ESPN, BBC, and top recording artists including Usher, Frank Ocean, Metallica, and many more.

He spends most of his time in the San Francisco Bay Area with the most beautiful woman in the world.