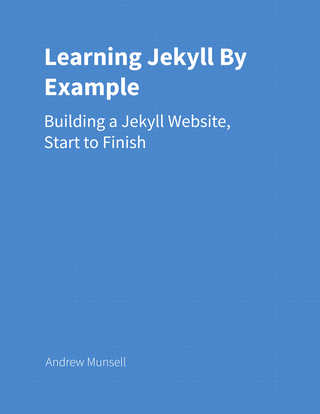 Please view the updated version of my book on my website.

In what can only be explained as the Ultimate Jekyll Tutorial, you will learn how to build a Jekyll website start to finish. From a blank folder on your file system, you will learn how to install Ruby, Jekyll, and the various modules it depends on. You will then build a full, working Jekyll blog from scratch using the Twitter Bootstrap framework and deploy it on Amazon S3.

"Learning Jekyll By Example" will teach you everything you need to know about publishing a Jekyll website.

Select portions of the tutorial are available for free on my website, but by purchasing the book from Leanpub, you'll receive a DRM free PDF, Mobi, and E Pub book with the entire walkthrough. As a bonus, the full book contains additional tutorials on optimizing your Jekyll website for search engines, speeding your website up with resource bundling and Amazon's CloudFront content distribution network, and a command line reference guide. You'll also get a Glossary of Terms filled with Jekyll-related material, as well as bonus material, including the files for the completed tutorial.

I am a college student attending the University of Washington with experience in several programming languages. My story dates back to 2009 when the original Palm Pre came out running the WebOS platform. Interested in Palm's forward thinking and the use of web technologies in a mobile phone, I began to develop for WebOS. After several successes that gained recognition from Palm and resulted in an invite to the then-exclusive WebOS App Catalog, I made it big when an app, Pixi Dust, won the $50,000 prize in the Palm Hot Apps competition, beating other games such as Angry Birds.

Since then, I've moved on to programming for the Mac, Windows 8, and iOS. I love technology, but my interest for medicine also has allowed me to blend my two passions by working on applications in the field of Radiology. Most recently, I presented at the Radiological Society of North America conference in Chicago, Illinois.