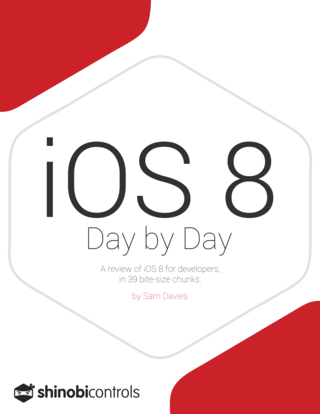 Sam Davies
A review of all the important part of iOS 8 for developers. Presented in 39 easy to digest chunks, each with a sample project.
Free!
With Membership
$9.99
Suggested price

Apple delivered iOS 8 to the developer world at WWDC in June 2014, before launching it at the wider world in September of the same year. The iOS 8 SDK was somewhat over-shadowed by the simultaneous announcement of a new programming language in the form of Swift, however this didn't mean that the core OS had been overlooked at all. Quite the opposite - a huge number of new APIs had been introduced, powering tons of new functionality.

iOS8: Day-by-Day is a review of the most important of these. Busy developers don't have time to trawl the WWDC videos and Apple documentation. Instead they'd like to get a high-level summary of the new possibilities, alongside some working sample code. This is exactly what iOS8: Day-by-Day provides. It started out as a blog series, and these blog posts now form the basis of the book.

You can see the original blog series at shinobicontrols.com/iOS8DayByDay and all the source code is available on GitHub at github.com/ShinobiControls/ios8-day-by-day

Sam is the Technical Evangelist for ShinobiControls, and spends his life creating code for both iOS and Android, blogging about it and meeting people. Prior to working in mobile software development, Sam worked as a computer vision researcher completing his doctorate in 2005 before continuing his research for the UK Government. Deciding that his passion lay elsewhere, Sam has been developing software for mobile devices ever since. By day you'll find him attending conferences, writing tutorials, meeting people and generally being a good guy. By night he's likely to be out entertaining people, armed with his trombone and killer dance moves. You can follow him on twitter @iwantmyrealname.

ShinobiControls was founded in 2011 to create a comprehensive set of powerful, interactive UI controls to help the developer community and enterprise create amazing apps. Since the launch of the first product, ShinobiCharts in February 2012, the business has grown rapidly, now serving thousands of customers with a rapidly expanding portfolio of controls.

Take app building to a new level and save yourself time and money with our range of easy to implement Charts, Grids and UI Controls. Try them today with a 30 day free trial! 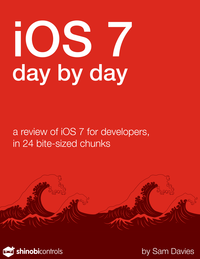 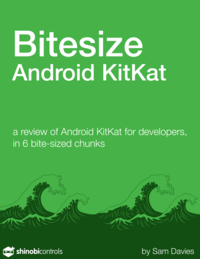