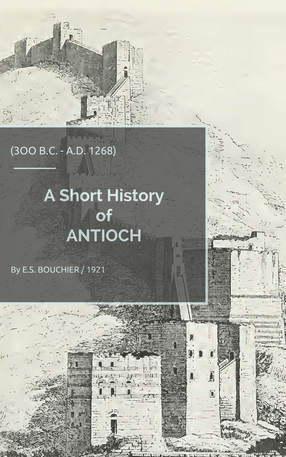 A Short History of ANTIOCH

A Short History of ANTIOCH

As a meeting-point of many civilisations, as the first centre of Gentile Christianity and the home of some of the greatest Christian teachers, as the capital of the Roman East for seven centuries, Antioch has peculiar claims upon our interest.

As a meeting-point of many civilisations, as the first centre of Gentile Christianity and the home of some of the greatest Christian teachers, as the capital of the Roman East for seven centuries, Antioch has peculiar claims upon our interest. Inferior to Alexandria and Carthage during the early Empire, it was destined to outlive both . When the Egyptian city had sunk to the rank of a minor town, far inferior to the new 'victorious capital' of the Fatimite caliphs, and the glory of Roman Africa was a mass of desolate ruins, Antioch again became for over a century and a half the home of an able and warlike line of princes, an ecclesiastical metropolis, and again resumed its old position as an outpost of European civilisation against the hordes of the Far East.

Based on the print-replica of 1921 edition publicly available at archive.org

Editing and reproduction has been done with care and attention.

This ebook edition has been produced by voluntary contributions.

Crafting for Sharing by Zeus Baba

These ebook editions have been produced by voluntary contributions.

~ Crafting for Sharing by ZeusBaba.com

Watsi is a global crowdfunding platform for healthcare that enables anyone to donate as little as $5 to directly fund life-changing medical care for people in need. 100% of every donation funds medical care and we are dedicated to complete transparency.