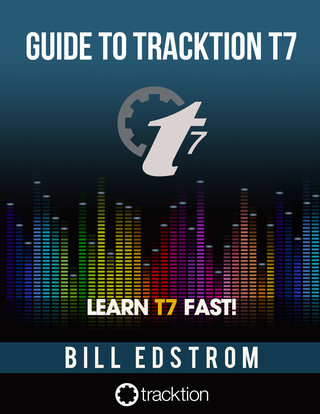 The Only Book on the Tracktion T7 DAW!

The definitive resource to learn and use the Tracktion T7 digital audio workstation software.

"Guide to Tracktion T7" is a new edition of the book "Guide to Tracktion T6." While it is very similar to the original book, it has been revised and expanded to cover the new features in T7. This book covers all the core workflows you need to get up and running with T7.

Keep in mind this is not the not an official manual. Despite that I continue to work closely with the Tracktion Software team to make it as accurate as possible. This book is does not cover 100% of features of the Tracktion DAW.

Also note that most of the graphics in the book were created using the T6 version. I expect don't plan to update the graphics to the new look unless it is significantly inconsistent with the operation of Tracktion. There are over 500 images in the book and doing a full update would delay book release by months.I suggest you refrain from doing a full printout because a new revision to the book will likely be released the next day! But of course, that's up to you.

If you find typos or misleading text, feel free to contact me through Leanpub. I always appreciate the help.

The following T7 new features are covered in the book:

I am a big fan of the Leanpub concept where we get the information out fast so it can be used while the software is new. With traditional publishing the book comes out months too late. With Leanpub, we get it out fast but it's not perfect or complete at launch. If that bothers you, then wait until you see this book transitions to 100% complete. After that point, revisions will be much less frequent.

I know there is valuable information in this book for anyone who is using the Tracktion DAW, learning it, or considering it.