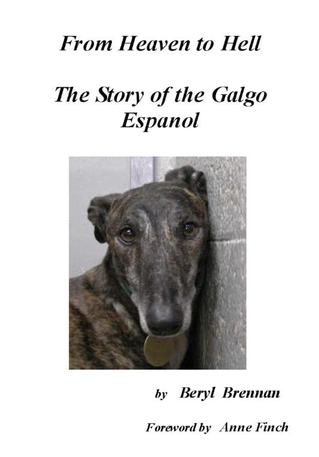 The Story of the Galgo Espanol

A Definitive Guide to the Galgo Espanol

A must read for everyone wanting to know about this breed.

Probably born with poised pencil in one hand and open notebook in the other, I’ve written for as long as I can remember.

Early retirement beckoned in 2002 and my husband and I moved to a 15-hectare farm inWestern Francealong with 2 horses, 2 cats and 3 dogs.

My passion for greyhounds and galgos was born in Suffolk, UK, whenin 1992 a stray greyhound turned up on our doorstep. In those days the dog rescue centres were full of greyhounds, no one wanted to adopt one, so we kept her. She became a PAT (Pets as Therapy) dog and thoroughly enjoyed visiting old folks' homes, especially when the birthday cakes came out!

Current residents now include a French lurcher rescued from the streets nearToulouse, a beautiful galga (female galgo) rescued from the Cordoba Killing Station, a male galgo who hadly injured a foreleg escaping from a kennel, a white galgo puppy whose hind leg was broken before he was 2 months old and which healed deformed. He will need ongoing operations to help the leg 'grow' as he grows. And finally Podenca Andaluz Bebe - found badly injured on aSevillemotorway. We are a foster home for galgos and podencos rescued fromSpainand looking for their forever homes inFranceand I also travel toSpainon rescue missions, visiting refuges and shelters around the country.

I have 2 blogs about dogs, Galgo News and Podenco Post. Where did the idea of Galgo News come from? I'd written a couple of articles about the plight of galgos inSpainfor the Weekly Telegraph and This French Life and the suggestion of a 'galgo blog' developed from there. It's now taken over my life - once you've had a galgo or podenco, helping improve their lot inSpainbecomes a passion - and as I've always been a communicator, what better way of helping raise their profile than via my weblogs and Facebook pages Save the Galgo and Help the Podencos.

I organise letter-writing campaigns to the Spanish national and regional governments, the Spanish hunting federations and Members of the European Parliament. Numbers of galgos abandoned in 2012-2013 rose dramatically to approximately 120,000-150,000.

I will continue my fight for an end to the misery of life for a galgo in Spain until I and the thousands of other sympathisers win!

Anne Finch founded the UK charity, ‘Greyhounds in Need,’ (GIN), the first globally to centre its concerns on the welfare of the greyhounds of Spain. A full-time nurse, Anne began her work for greyhounds in 1986 on adopting an abandoned greyhound and on researching the massive problem in the Uk and Ireland of the disposal of hundreds of healthy dogs with 10 or more years to run of their lives. She helped find homes over the south of England with the Retired Greyhound Trust, promoting greyhounds as pets. She campaigned for a greater public awareness of the situation, the prolific breeding, wastage and often harsh lives of these dogs, where gambling and profit are the over-riding aims of the game. Her concern soon extended to the 1000 or so poor-grade greyhounds being exported annually by lorry from Ireland to the dog tracks in Spain, worrying accounts of which were beginning to filter back via tourists and the press. In 1991, Anne could bear to hear these tales no longer and went to investigate the situation for herself. She reported back to the press, sporting and welfare authorities on the disgraceful conditions under which she found Irish greyhounds being kept and raced at the four tracks in Spain. She alerted dog lovers in mainland Europe to their plight, who, because they had no quarantine barrier nor masses of unwanted greyhounds of their own, were in a better position to offer salvation to dogs she could rescue, albeit the breed was still unfamiliar to them. Between then and 2002, three tracks in Spain and two in Italy closed down, partly due to her publicity work, leaving many hundreds of Irish dogs, some in very poor condition, needing rescuing and rehabilitating. Having already spread the word to mainland Europe, these new-found contacts rose magnificently to the occasion, transporting and taking many of these dogs into their care and promoting, under Anne’s guidance, what was then a new phenomenon for them, greyhounds as pets. The greyhound so captivated the hearts of those who generously took in these poor specimens in those early days, that 20 years on, GIN needs nowadays to meet the demands created by that original rescue work, for a continuing trail of retired Irish and UK ex-racing greyhounds to be available as pets in mainland Europe. In 1995 in Madrid, Anne was shown a video of the hangings of galgos (Spain’s own breed of greyhounds used for hare-coursing and hunting), which drove her to go to Andalucia to research its source. She learned that it had been traditional, possibly for centuries, for hunters to hang their galgos at the end of the 4-month coursing season in Spain each year. Since that time until the present day, GIN cooperates with Spanish associations all over Spain to publicise the plight of these dogs, denounce this horror and help find adoption families for the abandoned galgos who come into their care, donating equipment and practical assistance for their rehabilitation, funding their veterinary care and preparing them for export and transportation to European partner-groups for re-homing as family pets. Most important too, GIN supports and encourages the political and legislative work of Spanish rescue associations, helping also fund educational projects to change the mind-set of Spain’s younger generation.. Anne’s passion for education and research in depth on her subject resulted in several publications; the first UK book in 1997 on greyhound adoption, ‘The Pet Owner’s Guide to the Greyhound ‘, published too in a German version, and contributions to three other books on the plight and retirement of greyhounds, two of them in USA. In 1996,she produced, after two years of work, a 2½ hour instructional video in Spanish titled ’El Cuidado del Galgo de Carrera’ dealing with the detailed and compassionate care and management, from cradle to grave, of the racing greyhound, 1000+ copies of which were distributed freely to tracks, trainers, breeders and hunters within Spain. Anne has always endeavoured to research issues independently and in depth and not to rely on hearsay. She has involved herself, at home and abroad, in committee work, forums and debates between rescuers, hunters and greyhound racing representatives, which she feels is a valid way forward, however painful on both sides, to agreeing common welfare standards. This involved responding to a ‘call for evidence’ in front of a Government Select Committee on greyhound welfare in Houses of Parliament in 2006. Both she, personally, and her charity, ‘Greyhounds an Need’ have received numerous awards and commendations from home and abroad for the work they have initiated and continue to develop. ‘Greyhounds in Need’ http://www.greyhoundsinneed.co.uk continues to grow in resources, support and staffing, allowing Anne to take a much-needed step back from its day to day work to care for her husband, Arthur, who died in 2007 and to attend to her own much neglected life. She currently lives on the Isle of Wight, UK, with two galgo-amputees and spends much of her time engaged in her first love, music, both piano-playing and choral work. May 2013