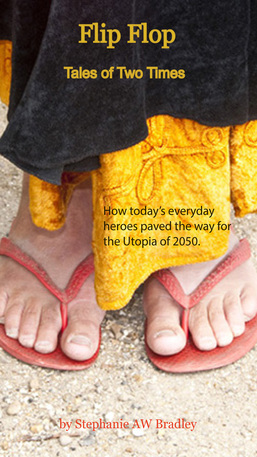 Stephanie AW Bradley
This story is set in the Utopia of 2050. An elderly storyteller shares her experience of a pilgrimage she made in 2010. Part fable part folklore, the story bridges the gap between today's looking-forward-to-an-as-yet-ungraspable-future, and the future we have all dreamt of.

Based partly on true stories of the many people today who are already living their lives in a way that makes the world a better place to live in, Flip Flop seeks to give us a glimpse of a very different world; a world where debt is unknown, a world where people's access to land and a home is their birthright, and where each and every child born is wanted, loved, and knows their purpose.

Through a dialogue between the young people of 2050 and a storyteller who was alive in 2010 the two times are explored through the images and descriptions the characters give as they seek to understand the relationship between the world of tomorrow and the world of today. - See more at: http://www.sponsume.com/project/flip-flop-tale-our-times#sthash.CQdTaX0M.dpuf.

In the Utopia of 2050, we learn, there is enough of everything for everybody, and everyone is needed; their skills and talents highly valued. People live in close relationship with the land and with each other. They have respect for one another and for the natural world they live in. Technology has its place but never replaces anything that humans can do well. Government starts in small local groups feeding back to other groups what their needs are and what they can offer. Only when the people of a region are certain they have done all they can to feed, clothe, house, and give opportunities for meaningful work to each other do they involve themselves with the affairs of a neighbouring region, either to offer or to seek support. Only when a countryfolk can feed, clothe, and house everyone well and is certain everyone is able to do work that is meanigful to them do they involve themslves with another country, either to offer or ask for support.

The people of 2050 understand how we are all interconnected. They are emotionally mature, and able to take responsibility for themselves. People's roles in their community are flexible and change over time as their needs, skills and talents change. All points of view are considered and good decisions are made that benefit everybody everywhere without exclusion. The people of 2050 understand geography and know the impact their decisions have and will only act when they know what effect those decisions will have on everyone everywhere.

In 2010 the author spent six months walking around England in an old pair of red flip flops collecting the stories of people already beginning to live life as if this were true. She met growers, teachers, housewives, walkers, she met engineers, politicians, singers and masseurs. She met children, young people, elderly and sick. She met rich and poor, from towns, villages and cities.

She discovered that we all have one thing in common; a dream of a better future where community matters, where land matters, where people matter. She learnt too that everyone has a part to play in making that dream come true.

In June 2014 Stephanie Bradley, a performance storyteller as well as a writer, will be on tour in England and Wales, sharing her stories and collecting new ones.  If you'd like to hear her tales of Our times, see the famous red flip flops, or have tales you'd love her to hear get in touch to see if she can visit your town, city or village: transitiontales@googlemail.com.

It could be that your tales are needed to create the Utopia of 2050! 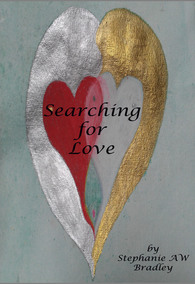