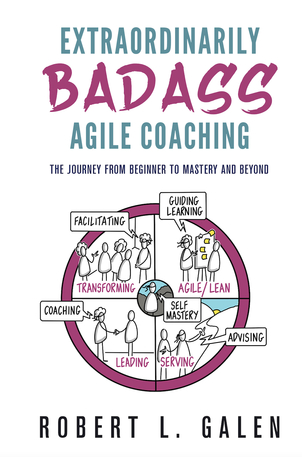 The Journey from Beginner to Mastery and Beyond

Do you aspire to become a truly Badass Agile Coach? A coach with a mission of professionalism, craft, passion, accountability, and expertise that you need to bring to bear in service of your clients? Then Extraordinary Badass Agile Coaching will be your trusted guide to meet (and exceed) that mission.

The profession of Agile Coaching is, in a word, confusing. That’s because of a number of factors, including:

And because of this confusion, it’s created a space where nearly anyone can claim to be an Agile Coach with little experience and narrow skills. Resulting largely in mediocrity and negative impacts for our clients, who by the way, are counting on us for help.

Extraordinarily Badass Agile Coaching enters this space to help alleviate the confusion. It’s centered on the Agile Coaching Growth Wheel as the competency and skill model to baseline your coaching skills against. Its core goal is to “raise the bar” as to what excellent agile coaching looks like. I intentionally use the term Badass to create a vision of professionalism, craft, passion, accountability, and expertise that you need to bring to bear in service of your clients if you represent yourself as an “agile coach”.

The book is strongly aligned with the Agile Coaching Growth Wheel as its primary model or framework. The key coaching stances (competencies) within the model include:

It also includes Self-Mastery at its core and Agile/Lean Practitioner, Serving, and Transforming as addition competencies.

Other key concepts include the Arc of a Coaching Conversation, Dojos for practice, Self-awareness, Continuous Reflection, Ethics and Agreements, and the Agile Coaching Mindset.

1 Introduction to Badassery in Agile Coaching

2 The Mindset of the Badass Agile Coach 19

11 The Badass Agile Coach’s Guide to Coaching UP 195

12 Badass Agile Coaching in the Language of the Client 219

19 Setting Up a Badass Agile Coaching Community of Practice 321

I took a slightly different approach with the EBAC book by inviting a handful of content contributors to share their thoughts in 6 chapters. I also some wonderful folks help with editing, artwork, and writing some very kind forewards. Here’s the team I'm incredibly grateful to.

Bob Galen is an Agile Methodologist, Practitioner & Coach based in Cary, NC. In this role he helps guide companies and teams in their pragmatic adoption and organizational shift towards Scrum and other agile methodologies and practices. He is Director, Agile Practices at Zenergy Technologies, a leading agile transformation company. He is also President and Head Coach at RGCG a boutique agile coaching firm.

Bob regularly speaks at international conferences and professional groups on topics related to software development, project management, software testing and team leadership. He is a Certified Enterprise Coach (CEC), CAL I trainer, and an active member of the Agile & Scrum Alliances.

Bob may be reached directly at: bob@rgalen.com or networking via: http://www.linkedin.com/in/bobgalen

Jennifer began her agile journey as a developer and never looked back. Along the way, she added to her agile toolbox by working in a variety of roles—project manager, Scrum Master, product owner, and agile leader—each helping to solidify and strengthen her agile mindset and coaching chops. Her wide-ranging experience and time spent at the senior leadership table give her a keen ability to work with folks across organizations, meeting them where they are to help them get to where they long to be.

Dedication: Thanks to Bob for investing in and supporting my journey.

Mark Summers believes happiness always comes first. He has learned through experience that if people are having fun, then anything is possible.

Mark was one of the UK’s first agile coaches and today is a leading figure in the ongoing story of agile coaching, a speaker at conferences, a leader of retreats, and a coach who never stops reflecting and evolving. If you’re an agent of change, he believes you have to be on a continuous learning journey yourself.

Uncompromisingly honest with himself, energizing and thought-provoking as a coach, Mark is committed to helping people succeed by becoming happier, more open, and more autonomous as individuals and as teams.

Dedication: For my wife, Melanie, and our children, Lewis and Norah.

Rhiannon comes from a different perspective, having spent the past 18 years as a social worker supporting child welfare. Rhiannon has worked both directly with clients and in a leadership role in several organizations. In her most recent role as a director of practice and professional development, she has worked alongside senior leadership and middle managers, supporting their growth through coaching and by being the energetic cheerleader we all need at times.

Rhiannon has worked extensively in the areas of diversity and race, creating curricula and training social workers on race consciousness, and helping many white social workers work toward a conscious acknowledgment of white privilege. Rhiannon has a deep passion for LGBTQIA+ advocacy and assists her organization in developing workers who use inclusive practices.

Dedication: I would like to dedicate this book to my family—my amazing partner, Ben, and our two children, Vara and Mika—and to the amazing team of people who have helped shape me— Perquida, Katie, Jo, and Chantel!

I’m a Certified Scrum Trainer and Visual Storyteller with a deep-rooted appreciation for methods of Design Thinking and Agile Ways of working.

As a Visual Thinking thought leader and practitioner within the Agile Community and beyond I endorse the use of Visual Thinking and Visual Storytelling to engage stakeholders, address customer needs, enhance team collaboration, and accelerate learning.

I joined Radtac in 2015 where I continue to assist individuals, teams, and organizations with an array of Product Innovation and visualization services.