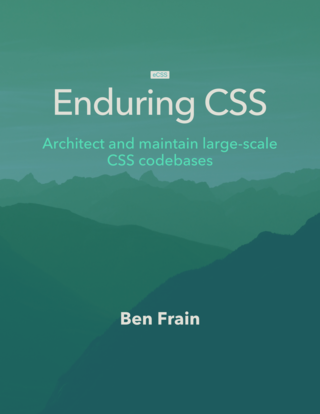 Learn how to write CSS for any size project. CSS that endures continual iteration, multiple authors and yet always produces predictable results. Enduring CSS is a robust and proven approach to authoring and maintaining style sheets at scale. Written by the author of the traditionally published 'Responsive Web Design with HTML5 & CSS3'.

This is a book to deal with writing CSS for large-scale, rapidly changing web projects and applications.

Here are some of the topics covered in the book:

- The problems of CSS at scale: specificity, the cascade and styles intrinsically tied to element structure.

- The shortfalls of conventional approaches to scaling CSS.

- The ECSS methodology and the problems it solves.

- How to develop consistent and enforceable selector naming conventions with ECSS.

- How to organise project structure to more easily isolate and decouple visual components.

- How to handle state changes in the DOM with ARIA or override selectors.

- How to apply ECSS to web applications and visual modules.

- Considerations of CSS tooling and processing: Sass/PostCSS and linting.

Ben Frain is a UI/UX Technical Lead at bet365.com. He is also the author of two existing books 'Responsive Web Design with HTML5 and CSS3' and 'Sass and Compass for Designers', both published by Packt Publishing.

He lives in Cheshire, England with his wife and two children.

An Interview with Ben Frain

Are you dealing with css in a big app? Do yourself a favour and buy Enduring CSS

Having bought ECSS just over a year ago I've used it in every project, no matter how big or small. It's greatly improved the productivity of myself and the team I've implemented it with. It has also been very easy to onboard everyone with.