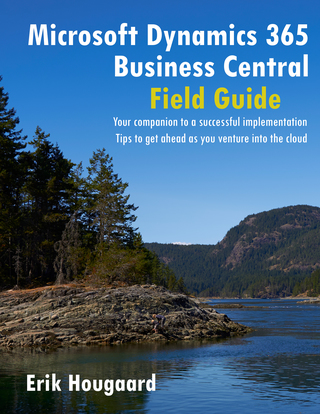 Your companion to a successful implementation. Tips to get ahead as you venture into the cloud

A companion book for implementing Microsoft Dynamics 365 Business Central. Targeted end-users, super-users and administrators, this book covers many of the challenges you're faced when implementing a cloud-based ERP system. From setting up the system and creating the first company, to user customizations and integration. Updated to 2021 Wave 2 v19.

Welcome to the Field Guide for Microsoft Dynamics 365 Business Central.

Business Central used to be Dynamics NAV and before that Navision. NAV has always been a partner-driven application. Customers buy the software at a partner, and the partner helps with implementation. A great model that has worked for over a million users across the globe.

Now Business Central is a cloud offering; there’s no longer an installation. You no longer need an IT guy to install it and then a consultant to help you set it up. You can do that yourself. Most customers still chose to get the consultant help to make sure you’re doing it right and to ensure a great start.

This book is written to help customers who venture into Business Central, with or without external help. Written to help understand the system and ensure a great experience starting with Business Central. The book is not written to be read from cover to cover. Instead, it’s meant to be a Field Guide. A companion book to help you through the implementation. And later, when you need information on a specific topic or if you need a bit of inspiration. The documentation from Microsoft is pretty good, and I’ll provide links for deep dive and background information.

The book will be published on a continues schedule on LeanPub, and you buy access to download the book again and again after purchase. I will make regular updates whenever something changes and when Microsoft introduces new versions and functionality.

Business Central covers a vast area of functionality, and the book includes the areas and issues I encounter in my daily work with Business Central customers. I'll add new chapters and details based on my experience and reader feedback.

I’m using an English language layer on my Business Central throughout this book. If your Business Central is not in English, switch temporarily to English in My Settings to more comfortable being able to follow the instructions.

If you cannot find the answer you need in the book, feel free to contact me. I’m always open to suggestions for the next topic.

Being part of the Microsoft Dynamics NAV community since 1990, Erik Hougaard has worked with every version and visited all corners of the system. Worked with NAV for the biggest companies in Denmark and across numerous industries. Erik has been awarded a Microsoft MVP Award for his Dynamics NAV contributions every year since 2014. Erik developed a 3000 users Dynamics NAV system for A.P.Møller Mærsk (MAERSK) from 1999 to 2013.

As the primary architect on Glomaris, Erik designed a complete shipping ERP platform, running on Microsoft Azure with distributed services across the globe for the shipping industry.

Erik Hougaard has been programming anything that looks remotely like a computer since he was a child, it started with programming games on home computers and quickly turned to business computers at an after-school job at a local company where Erik helped with PCs in a big mainframe installation.

Participant in the Danish robotics championship for many years – Winner in 2000 and 2001. The competition is about constructing robots that can overcome a course without human interaction. Held at the Technical University of Copenhagen (www.robocup.dtu.dk)

Erik has played trumpets, trombones, and tubas since childhood; he played bass trombone at DRAM Big Band, a band within the Danish National Radio and TV for ten years. The band is a not-for-profit orchestra that plays at Koncerthuset in Copenhagen (www.dramband.dk) Currently playing with the Vancouver based South Van Big Band.

A combination of interest in 3D printing, music, and programming resulted in the development of www.3dmouthpieces.com – a groundbreaking website that allows people to design brass mouthpieces online and print on personal 3D printers.

An Interview with Erik Hougaard

There is an old saying "there’s no substitute for experience", well now for Microsoft Dynamics 365 Business Central there is, it’s this book. It doesn’t matter how long you’ve been using NAV, I’m confident this book will teach you something, elevate yourself to hero status among your fellow users and take control by reading it cover to cover. This might be one fieldcraft book your life doesn’t depend on but your system's health does.