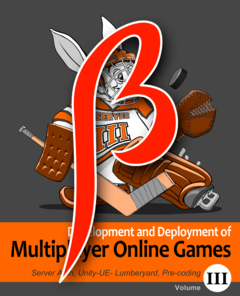 The idea behind this book is to summarize the body of knowledge that already exists on multiplayer games but is not available in one single place. And quite a few of the issues discussed within this series (planned as three nine volumes ~300 pages each), while known in the industry, have not been published at all (except for maybe in discussion forums).

Programming and deploying an MOG is a daunting task, and having a frame of reference is usually quite helpful — "hey, those guys have already tried this, and it worked for them."

Vol. I-III of the series are about MOG Architecture. In Vol. I and II, we discussed general issues (including Communication flows) and Client-Side Architecture respectively. By the end of Vol. III, we'll complete our discussion of the things related to architecting the Server-Side of your MOG, and this will conclude the ARCH part of the series. Vol. IV-VI will describe issues related to Programming, and Vol. VII-IX will be about Deployment and post-deployment tasks.

The book has got endorsements from quite a few people known in the industry, including people from Amaya, Lloyds Bank, Lionhead Studios, BlueByte (Ubisoft Studio), Lightstreamer, Plarium, and (formerly) Zynga. For the endorsements themselves please see Kickstarter campaign.

And speaking of crowdfunding - the book has already been funded on Kickstarter and Indiegogo - with over 800 backers total (and counting). BTW, here on Leanpub there is a bundle which is exactly the same as an ongoing InDemand campaign on Indiegogo - $20 for Vol. I-III together with an early access (though on Indie there is also an option to pre-order paperback or even hardcover).

Since When Are Rabbits Programming??

I cannot speak for all of rabbitkind, but this particular hare has gone alongside my writings for quite a while now. He was born as "No MT Bugs" Hare in 2010, in an Overload article titled "Single-Threading: Back to the Future?"

Therefore, there is evidence that this particular rabbit has been programming at least since 2010. Yes, he has changed his appearance, but deep inside, he is still the very same bunny with a naïve idea of making programs less buggy. BTW, the character is created by Sergey Gordeev, a guy with many animation awards, known (among other things) for being a director of some of the Animated Mr. Bean series.

Who Is this Book For?

The book is intended for those intermediary developers who want to become senior ones, and for senior developers and up. I expect that the book will also be useful for decision-makers, from PMs all the way up to CEOs — so if you by any chance know one, please make sure to give her a link to this page ;-).

On the other hand, if you are working on your first programming project, this book will probably be too difficult for you. There will be no explanation on what event-driven programming is all about, what's the difference is between optimistic locking and pessimistic locking, why you need a source control system, and so on. Instead, there will be discussions on how the concept of futures fits into event-driven programming, when the use of optimistic locking makes sense for games, and how to use source control in presence of unmergeable files.

In the same spirit, the book is not intended to be a CD to copy-paste your sample MOG from. Instead, the book aims to help you write your own code that is tailored to your own needs, and tries to advise on the available choices at most of the junctions.

Vol. III is currently in "2nd beta", with 80% of the content I'm planning, already included. Still, there will be more explanations.

As I'm working with professional editors (and vast majority of them doesn't know anything but Word :-( ) - I keep and edit my manuscript as a bunch of Word .docx files (I throw myself at the mercy of the court, and assure that it is only because of dire circumstances beyond my control ). I'm using Word to export .docx to PDF, and some_VBA_scripts+Calibre to export to .MOBI and .EPUB. However, .EPUB generated by Calibre, doesn't pass checks here on LeanPub (though it seems to show ok on iBook and on Clearview). If you want .EPUB - drop me a line, I will e-mail it to you.

Please note that current formatting is quite ugly; it will improve after being professionally formatted; it is also expected to pass all the .EPUB validity checks.

All the comments are extremely welcome - and they DO help making the book better.

20 years ago (damn, I am getting old) I was a co-architect for an electronic stock exchange of a G20 country, and for all practical intents and purposes stock exchanges are just another game genre. The project was fun and, among other things, allowed for real-time trading over the cellphones of that time (those with 9600 baud connection).

A few years later, I became a chief software architect working for a start-up that quickly grew into a rather large online game with half a million simultaneous players that processed half a billion user transactions per day. The project taught me a damn lot about such different issues as scalability, DB physical layout, server farms, attackers and cheaters of all kinds, and bot fighting — just to name a few.

Since then, I have consulted and performed due diligence on several game-related projects. In addition, I've spent quite some time researching the field and discussing related problems and their respective solutions with people from the industry.

I feel that this puts me in quite a unique position of knowing not only one single game, but a bunch of them, and being able to summarize and generalize my real-world experiences. Oh, and I have been writing for industry journals (and am especially proud of articles in CUJ and C++ Report) since 1998, so the process of typing sentences is not something new for me either.

If you really want further details, you can dig them out of my LinkedIn page