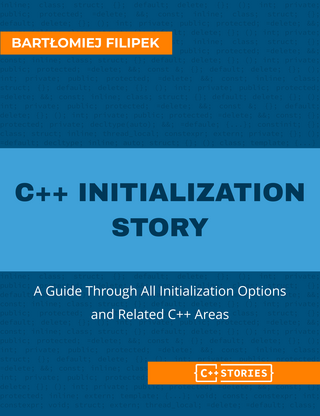 ~180 pages, ~60 code samples, 2 quizzes, and several exercises. All for Modern C++ techniques related to data members and how to initialize them safely. C++20 included!

Throughout this book, you will learn practical options to initialize data members in Modern C++. More specifically, this text teaches various types of constructors, non-static data member initialization, inline variables, designated initializers, and more. Additionally, you’ll see the changes and new techniques from C++11 to C++20 and lots of examples to round out your understanding.

The goal of this book is to equip you with the following knowledge:

The book contains 15 chapters in the following structure:

Most sections are completed, but I'm still working on filling two chapters and polishing the quality.

The book is intended for beginner/intermediate C++ programmers who want to learn how to work with static and non-static class data members in Modern C++ (from C++11 to C++20).

You should know at least some of the basics of creating and using custom classes.

Bartłomiej (Bartek) Filipek is a C++ software developer with more than 12 years of professional experience. In 2010 he graduated from Jagiellonian University in Cracow, Poland with a Masters Degree in Computer Science.

Since 2011 Bartek has been regularly blogging at bfilipek.com and cppstories.com. Initially, the topics revolved around graphics programming, but now the blog focuses on core C++. He's also a co-organiser of the C++ User Group in Cracow. You can hear Bartek in one @CppCast episode where he talks about C++17, blogging and text processing.

Since October 2018, Bartek has been a C++ Expert for the Polish National Body which works directly with ISO/IEC JTC 1/SC 22 (C++ Standardisation Committee).

In his spare time, he loves assembling Lego models with his little son.

See his blog at cppstories.com.

A new thorough and practical book from Bartek that will take you by the hand and give you an in-depth understanding of a core aspect of C++. The book starts with simple examples and then guides you through various aspects of constructors, and different kinds of data members. I like that it addresses the latest features of C++, including C++20.

Data Member Initialization in Modern C++ gives you an excellent overview of how to initialize class members. I like the practical examples, detailed overview, and discussions of various techniques for custom types design.