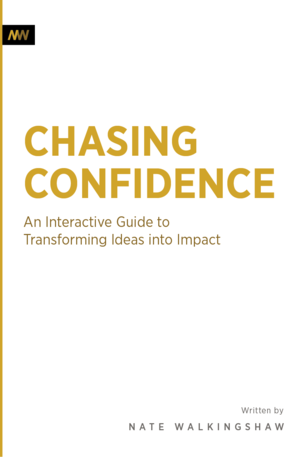 A founder's story of failures, clawing at concrete to build successful teams, companies, and products!

Chasing Confidence helps you make sense of the “why” behind building customer-centered products – what are the principles and patterns most product builders know to understand problems and needs and build solutions for people. The book will challenge you to apply what you’re learning through exercises at the end of each chapter. Although it will help you with “how-to-do’s,” it’s more focused on “how-to-be” so you can build confidence in yourself in building products at scale.

Nate Walkingshaw is most widely known as a pioneer in technology product development and his Directed Discovery methodology, Nate is obsessed with how products are built and the teamwork it takes to build them. As CXO, Nate rebuilt Pluralsight's platform experience from the ground up, empowering businesses around the world to acquire the tech skills they need to thrive in the digital age. His leadership and human-centered design mindset contributed to the company's successful IPO in May 2018.

Nate began his product experience journey in 2004, when he started his first company Paramed. At this startup, Nate revolutionized the medical patient transport industry with Paraslyde, which lead to Paramed's acquisition by Stryker Medical in 2009. Following the acquisition, Nate became the lead of global R&D at the Stryker emergency services division. In 2011, Nate build Brightface, a product development company that focused on mobile and web applications. At Brighface, Nate created Cycleface, which was acquired by Strava Corporation, the #1 fitness app for endurance athletes in the world. Nate then became the Chief of Research and Innovation at Tanner Labs, a technology research and development division that Nate founded inside O.C. Tanner Recognition Company. There he built the company's first human-centered product development team and shipped three best in class products within the first year.

Nate is the co-author of the best-selling book "Product Leadership: How Top Product Managers Launch Awesome Products and Build Successful Teams," published in June 2017. Because of his passion for product development and experience, Nate can frequently be found sharing his craft from the stage and often consults some of the world's largest companies, providing them guidance on how to discover and deeply understand customers' needs.

You reforest the world

Tree-Nation is the largest reforestation platform enabling citizens and companies to plant trees around the world.

Tree-Nation’s mission is to reforest the world. The organisation offers people the possibility to select from over 300 different tree species which can be planted in 50 different reforestation projects located in 6 different continents. In every project, the species are carefully selected according to the specific benefits they bring for the environment and to the local population. Each tree planted on the Tree-Nation platform is assigned its own unique URL, which means the species, the location, the plantation project information and the CO2 compensation values can be tracked throughout the lifetime of the tree. Since its inception in 2006, more than 130,000 users and more than 2,200 companies have planted 5 million trees using its platform.