In the Cangjie Dictionary, Chinese Characters are sorted alphabetically via their cangjie typing codes.

As an example, characters that begin with the A element (Sun or 日) are shown below.

While the initial intent of this dictionary was to make it easy to look up a characters Cangjie typing code, (basically a code that allows you to “touch type” a Chinese character) I’ve found that it also serves as an easy and quick way to look up characters in general.

Here’s a look at all the top level groupings for characters listed alphabetically. You’ll also find that sub groupings (based on the other elements of the character) are sorted via their cangjie codes also.

Each entry includes: a heading and an information box.

Clicking on section titles will return you to sub-index or index.

The cangjie typing code for a Chinese character has a maximum of five characters. Each code element can be represented by a symbol i.e. 日, 月, 金 etc or by one of 25 letters.

There are a total of 24 code elements in all. (Z isn’t used and X is used for “Special” cases.)

The image below shows a keyboard with Cangjie codes at the bottom right corner of each of the “letter” keys.

The a code, 日 can be used to represent parts of characters like 是, 門.

The b code, 月, can be used to represent parts of characters like 且, 具,骨.

The c code, 金 can be used to represent parts of characters like 父, 分 (the upper part).

If you remember the code elements and their associated letters, it makes it easier to spot those elements when you are looking at a character and are trying to figure out what letter its cangjie code begins with.

To make learning the codes easier the codes and their associated letters can be broken into groups.

The 24 codes can be broken into 4 groups:

There is also one element, the “x” element that doesn’t belong to any of these groups.

The philosophical group contains the code elements for:

To remember these codes, I think of: 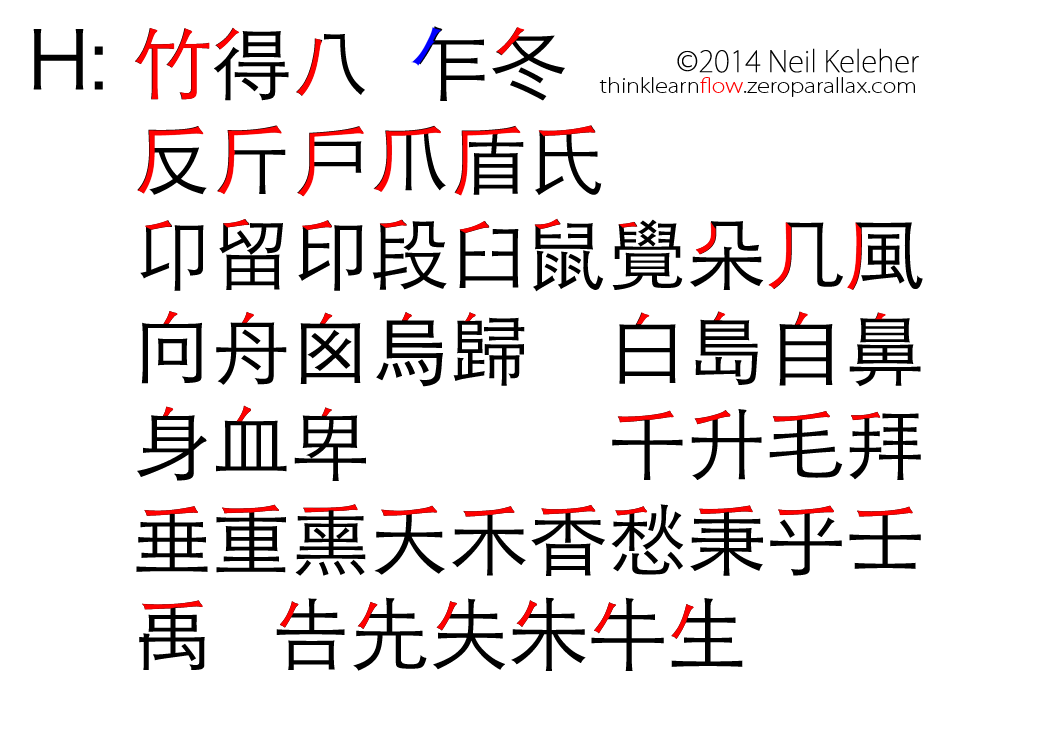 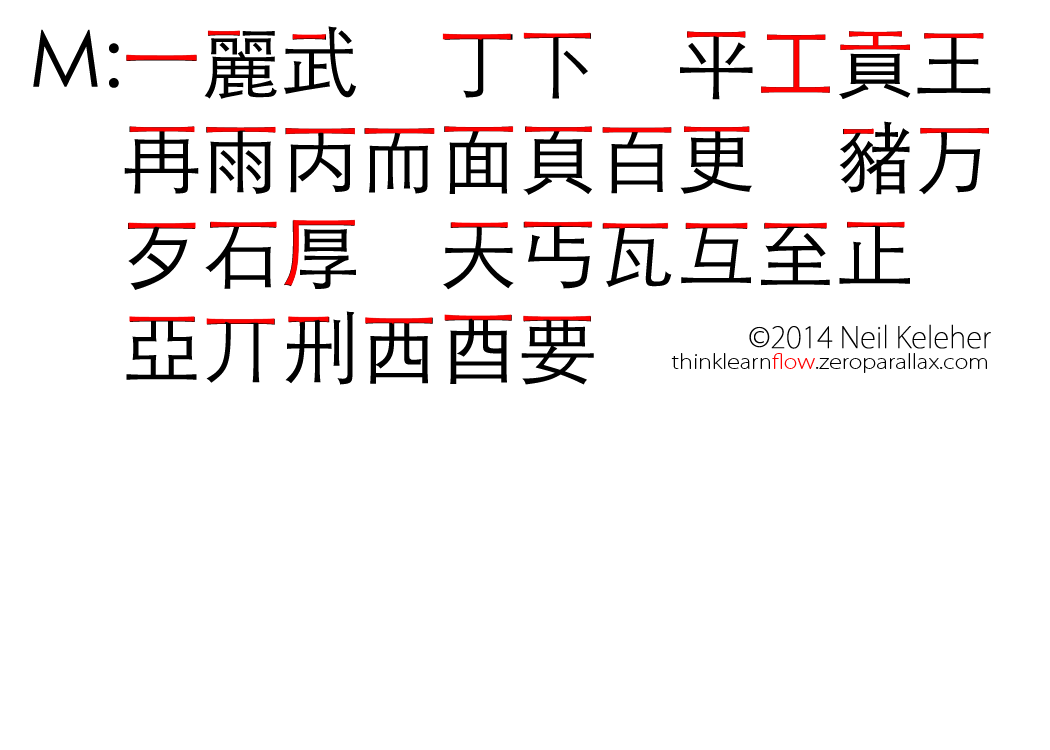 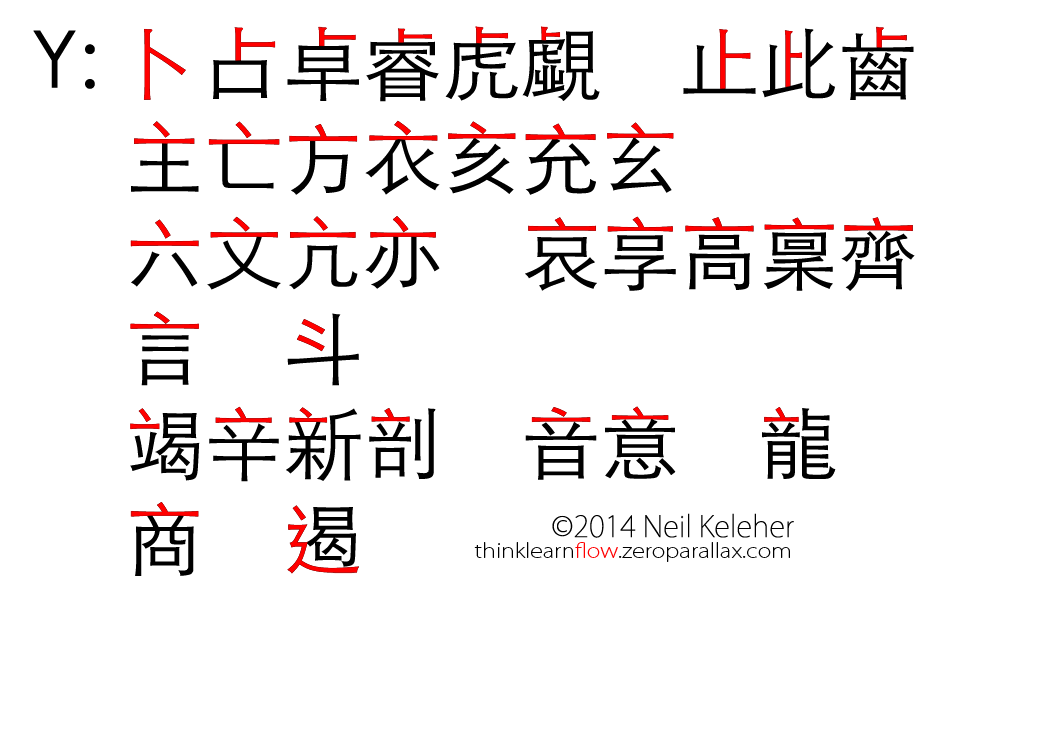 The final code, x, is used for characters which are difficult to code using the above elements.

Of all the cangjie code elements, x is the only one that isn’t at the beginning of any character code.

Examples of characters that use the x code, along with their cangjie codes are:

Generally when figuring out the cangjie code of a character:

Characters that can be Divided into Right and Left Parts

If the character has a left and right part, then you look at the top of the left part.

So for example, 明 (bright), you’d look at the element on the left, which is a sun. And so you know that the code for this character begins with an a. And since the part on the right is a moon, the code ends with b.

For the character 膝 (knee), the part on the left looks like a moon, hence the first element in its code is b.

For the character 貓 (cat) the top of the left most part is a sort of moon shape. And so the code for this character begins with b.

Characters that Can Be Divided into Top and Bottom Parts

If the character has a top and bottom part then you start at the left hand side of the top part, or you look at the top part as a whole.

For example, the character 軍 (army, military) has a top part which looks like the moon shape but with the two horizontal bars removed. (冖). And so the cangjie code for this character begins with b.

Dividing Top and Left into One Element or Two

The top part of the character 單can be broken into two elements and so the top part can be represented by rr.

The left part of cat, 貓 also has two elements, “b” for the top part and “h” for the bottom part and so the left most part of this character is represented by the code bh.

For enclosed characters you start at the outside and work inwards.

So for example, 四, (four), you start on the outside with the code for field 田 which is w. Then you move to the inside two legs, 金 which is c.

For solid characters start off at the top.

As an example 止 (stop) has the code ylm. In this case the 卜 element is taller than the 丨element and so it is the first element in the cangjie code for this character.

Since a cangjie code has a maximum of five elements there are some rules for cangjie codes.

The first part of a character is represented by one or two code elements.

The second part of a character can be represented by a maximum of three code elements.

If a character has more than two parts, then the middle part may have only two elements and the final part 1.

Rather than giving examples here, you can get a feel for the codes by using the reference pages.

Looking up a Character

To look for a character so that you can find it’s typing code all you need to be able to figure out is the first part of a characters cangjie code.

Then go to the relevant page. Or you can go through page by page and practice typing characters to get a feel for touch typing Chinese Characters.

When character groupings are really large, then I’ve also sorted the characters by second elements.

To practice typing Chinese characters using cangjie input codes you need your computer set up for it.

If you have a Mac computer, setting up your computer for cangjie input is relatively easy.

Chinese-Traditional” and then the sub-entry “Cangjie”. * Also select the “Show Input Menu in Menu Bar” option near the bottom of the dialog box. You can then exit System Preferences.

To select Cangjie, click on the flag at the top right of your menu bar, to the left of the clock.

You should see “Cangjie” as one of the items. You can click on that item. You will then be able to type using Cangjie code.

Note, make sure caps lock is off. (Otherwise you get normal letters.)

When typing chinese characters using their cangjie codes, enter the full code and then press either enter or the space bar. (This may be dependent on which operating system version you are using.)

To switch back to normal typing (i.e. english characters) you can click on the flag and select the appropriate input mode. (U.S. or perhaps UK or Canada…)

You can also use “command-spacebar” to switch between your regular language and cangjie input.

If you have more than two input modes, then pressing “command space-bar” will cycle you through those options.

The following is a list of characters for which I personally find it difficult to remember their cangjie typing codes.

To order the full version use this link:
Cangjie Dictionary