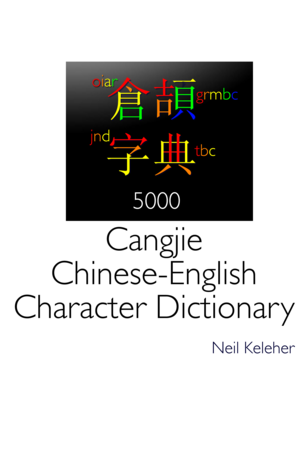 The cangie chinese english dictionary originally started of as a project to make it easier to look up cangjie typing codes for chinese characters.

I organized the characters by cangjie codes in such a way that it was easy to find a character (and it's cangjie code) simply by looking at the shape of the charcter. I then figured out that I'd effectively created a simple look up system for chinese characters. And so I created the Cangjie chinese english dictionary.

There is a little bit of work involved in learning the cangjie system, but all you need to learn to use the dictionary is how to recognize and parse the first element. and to that end I've included an introduction to cangjie codes at the beginning of the dictionary. There are 24 cangjie elements and the correspond 24 letters of the alphabet (x is used as a special case element and z is not used at all.) In addition I've included some simple memorization or encoding aids to make it easy to learn what symbol each letter represents. If you can already touch type in English (using the qwerty layout) then it can be relatively easy to add cangie touch typing on top of that skill. but even without the ability to touch type, the cangjie system offers an easy way to look up chinese characters.

In the past I've had to deal with paper dicitonaries and have either tried using the radical index or the stroke count index when I dind't know the pronounciation of a character. Both methods are difficult, the radical method becuase sometimes its difficult to identify which part of the character is the radical, the stroke count because sometimes its difficult to know if what looks like a single stroke is actually a single stroke and vice versa.

There can be some confusion with looking up characters via their cangjie codes but I've tried to minimize that by making it as easy as possible to recognize the elements of a character. And I've also included a phonetic index as a back up.

Dictionary entries include the english translation as well as words (of more than one character) the cangjie letter code and symbol code, stroke count and radical.

I've also made it easy to navigate between indexes and entries so that you can go from any entry to the relevant cangjie index or relevant phonetic index (even for characters with more than one possible pronounciation.)

As an additional tool to making it easier to look up characters, I've further sorted characters in their subgroups alphabetically via their cangjie codes.

The dictionary itself has over 5000 entries.

Although also a yoga teacher, one of the main reasons Neil Keleher moved to Taiwan was to study Chinese, in particular reading and writing.

He once had the thought "how crazy would he be trying to learn to read and write Chinese". So crazy he is.

He first started trying to use a calligraphy brush after graduating from university in 1997. He found books on Japanese calligraphy and tried teaching himself. Later he visited a Calligraphy teacher in San Francisco for a few lessons and then continued to self learn.

After moving to Taiwan he began to learn Cursive style calligraphy (Cao Shu) and has also been learning the old Seal Script.

He spends time trying to read novels in Chinese (Currently he's reading the Chinese translation of Game of Thrones) and that's where knowing Cangjie comes in handy.

He types characters he doesn't know in Google Translate, and then later adds them to his Excel Chinese Database which is the source for this Cangjie Dictonary.