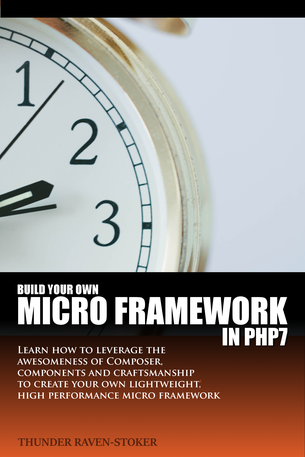 Build Your Own Micro Framework in PHP 7

Build Your Own Micro Framework in PHP 7

Leverage the awesomeness of Composer, components and craftsmanship to create your own lightweight, high performance microframework

Thunder Raven-Stoker
The big names in PHP frameworks have all shipped their own micro versions; Zend, Laravel and Symfony to name but three. Yet with Composer and Packagist to hand, it's surprisingly easy to roll your own, tailored to your precise needs. This book will show you how.

It's an exciting time to be coding in the PHP world just now with the explosive combination of PHP7 and PSR-7 out there in the wilds and available now. Both of these game-changers make a hugely positive impact on the future of PHP as a key language for web development.

PHP7 brings a new level of maturity to the language's object model and a massive boost to performance. PSR-7 brings us a unified set of HTTP messaging interfaces to help us service the request-response cycle. These two, in combination with the awesomeness of Composer and Packagist, make for exciting times ahead for anyone involved in the PHP application development ecosystem.

With this book, we won't be reinventing the wheel. Instead, we'll be trying something new - creating our own micro-framework by leveraging the awesomeness of Composer and Packagist to select precisely the components that we want and wiring them together with framework agnostic code to provide all of the features that you need and none of the bloat that you don't.

Topics covered in the book include: