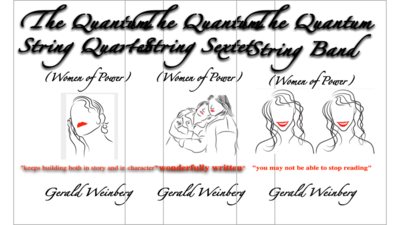 This bundle allows you to enjoy all the volumes of the Quantum Stringers Series, up to date, at a special discount price. 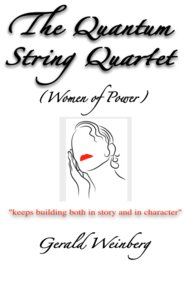 In California, Ember, a determined blind girl tries to control her angry heat that mutilated the man who attempted to molest her.

Ember runs away to Las Vegas to escape her overprotective father. She meets  Bolton, but they rub each other the wrong way.

When Ember is set upon by unknown attackers, they must fake a marriage and use their powers to escape. When they learn of all they have in common, they become friends, but not lovers because of Ember's fear she cannot control her power when sexually aroused.

Meanwhile, in a small city in Iowa, Gina Red-Bear, a beautiful but alienated half-Sioux, half-Swedish girl, mentally controls the emotions of all the people around her. She dominates her wheel-chair-bound twin brother, George, forcing him to use his own cerebral power to synthesize illegal drugs.

Bolton locates George through an ingenious internet search. He leaves Ember for Iowa, where he encounters Gina. She forces him to fall in love.

Ember, intensely jealous, heads for Iowa and meets George, saving him from his sister. In spite of her feelings, she risks exposing her powers to rescue Gina, first from greedy drug lords and then from her own attempted suicide.

The Quartet decides to try to set aside their differences and band together for mutual protection, though that's easy to say but hard to do. All four return to New Mexico, seeking to find others of their kind.

The Quantum String Quartet decides to try to set aside their differences and band together for mutual protection, though that's easy to say but hard to do. All four return to New Mexico, seeking to find others of their kind.

In Colorado, they discover an innocent Down Syndrome girl. Alandra's aging parents have devoted their lives to hiding her psychic ability. They fear they will no longer be able to protect her from those who would exploit her ability to extract pure precious metals from abandoned gold mines.

The mysterious attacks on Ember continue. To protect themselves, the five begin to overcome their conflicts and jealousies and create The Quintet—in which each complements the others abilities and deformities.

Through Gina's bizarre dreams, harnessed in a Bolton-designed dream cage, the Quintet discovers that somewhere in the Utah wilderness, someone is teleporting bombs into government offices. This person can only be someone who shares their power to manipulate the strings of the universe, but seems to be supporting a survivalist's plans for world domination.

Gina, seeking to create the family she never knew, impetuously decides that only she has the power to find their mate and confront him. She discovers that the head of the survivalists, The General, has chained his deaf son, Lee, by threatening his mother, but Gina's power alone is insufficient to rescue them. When Lee's mother dies from abuse, Gina is trapped with Lee in The General's underground redoubt.

Uncertain that Bolton, George, and Alandra can quickly recruit military help from the government, Ember enters the Utah compound alone to rescue Gina. Instead, she is caught in The General's trap. When the rest of the Quintet arrives, they, too, are trapped. Ember has a plan to free them, but she must choose between two evils: helping The General or risking the lives of her loved ones by using her power.

The Quintet wants to rescue their deaf mate, but must wrestle with their fears of using their vast powers, which can have devastating unintentional consequences.

Ember risks her own life because she refuses to sacrifice the weakest member of their team. In doing so, she destroys The General's threat to enslave humanity.

United after all their adventures, The Sextet members have discovered one another and revealed their deepest values. They have grown in skill and sophistication, becoming, in the end, more fully human, ready to find the rest of their mates and pursue further adventures.

Weinberg has produced a delightful book that kept building both in story and in character development as you progressed. The processes of ferreting out the puzzle pieces with the characters as the adventure took them out of their comfort zones is exhilarating, and just when you think you see the outline of the picture the author brings in new characters and information to make you start all over again. Adventure. Mystery. And something … unusual. - tlcalderone, LibraryThing Early Reviewers

This book was an interesting read that always kept me wondering what would happen next. The book focus's on a group of young adults who were born with deformities but also special powers. As they find each other and their lives become integrated you can see the character's growing.

Because they are complex people, you can care for them and care about what happens to them. On occasion the shifts in point of view can be disorienting but it doesn't take long for the author to tie the new views into the progressing storyline. I enjoyed the read overall and if a sequel is released I hope to read it as well! - Unidragon, LibraryThing Early Reviewers (NOTE: There is a sequel, The Quantum String Band) 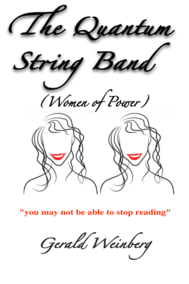 The story takes place in the near future, centered in the spectacular Southwest–the deserts, cities and canyons of New Mexico; a Prince’s yacht in the Gulf of Bahrain; Bolivia–the cities, the Indian village of Ozumito in the mountains of the Altiplano, a terrorist fortress hidden in the ancient mines of Ozumito; an artificial cavern carved in the ice of Antarctica; the remote and uninhabited Malden island in the South Pacific; and in a a home-made satellite orbiting the Earth.

Two years after defeating the clandestine army of General Jakes, the members of the Sextet have settled into using their unique powers to support a routine existence. Gina enriches herself using her persuasive powers to gain international renown at the poker table. Bolton–having given up on the search for others with special talents–fritters away his time amusing himself controlling toy cars and flying machines with his mind. Alandra uses Lee’s power to teleport around the world so she can use her power of decomposition to collect pretty mineral specimens. George builds an international reputation as a great chemist.

Only Ember is not using her unique power, convinced it must have been gift for some higher purpose. She studies Aikido and other means of non-violent defense, hoping to learn to control her anger that unleashes her awesome thermodynamic power. Unwilling to risk interacting with ordinary people, she ashamedly yearns for the camaraderie of the days her Sextet friends were working together fighting the General.

Ember’s yearning is unexpectedly answered when a gigantic rock appears in the sky and crushes Gina’s new mansion. There’s no mistaking the significance of this rock from the sky. The General has escaped. He has found someone with Lee’s telekinetic power to use as a weapon for world domination. He intends to eliminate the Sextet, the only people with the power to defeat him.

The members of the Sextet, always searching, discover they are not alone in possessing the power to manipulate reality. Frightened, yet unable to use their powers because they cannot locate the General, the now String Band goes into hiding. They move constantly to avoid the General’s weapon, which can strike any known location.  As they battle the General with the clever use of their powers, Ember is shocked once again, but relieved, and comes to accept the moral necessity of opposing certain evils with deadly force.

Inspired by the ingeniousness of Gina’s three-part plan, Ember is determined to find ways the String Band can work together to preempt evil, do good, while at the same time selfishly relieving her own loneliness.

I read the entire Quantum Stringers Series. ! I loved them all. They all have the same super short chapter format and all hooked me as soon as I started. The characters and the sci-fi plot are rich and the imaginative twists and turns are as delightful as they are surprising. The characters have real character – you really feel you start to know them. Their powers are well beyond the (current) realms of reality but their humanness and their flaws aren’t. Heartily recommended. – J. Jagger, Amazon Reviews

In the end two things in this book stand out for me. All of the main characters are special. Special in this case stands for the best and the worst meaning of the word. They all have a “superpower” but were all born with handicaps. It made me think about how (in-)appropriate language at some times is.

The second point is the criticism Weinberg has on so called “patriots” of the United States. Always watch out for people who blur the lines between patriotism and nationalism, especially when the odd portion of religious (here: Christian) fanatism is added .

On a final note having read several of Weinberg’s non-fiction books it is interesting to see how he lets people and groups of people develop dynamics in the same way as described there. – msdeibel on Smashwords