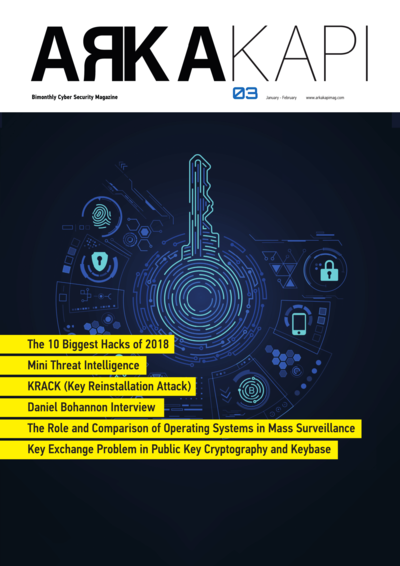 Arka Kapı is a bimonthly cybersecurity magazine made by hackers for hackers. It’s aiming to raise awareness for being conscious users on the ever changing world of technology. Our magazine features articles that are informative, step-by-step instructions, how-to guides, interviews with prominent figures in security, and hacker news.

As of this issue, we have left behind two significant dates: 10 December and 1 January.

Last month on 10 December it was the 70th anniversary of the proclamation of the Universal Declaration of Human Rights ( UDHR ); the purest form of a saga humanity had been breaking its neck to write - from Spartacus to today. As the Arka Kapi Magazine we have embraced The UDHR - especially Article 12 and Article 19 - as one of our most significant norms.

We also celebrate your new year and hope you had a wonderful and secure year!

In the third issue, we are going to talk about some of the attacks that threaten our individuality. You will find articles on the dangers and working principles of various systems and attacks, as well as some offline systems and more. We aim so that you may predict where the attack may come from to protect yourself- and your rights!