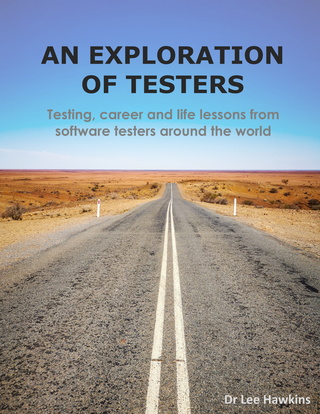 An Exploration of Testers

An Exploration of Testers

How would software testers from around the world answer the same set of eleven questions about testing and their career?

Explore the similarities and the differences in their responses in this book!

This book is a compilation of the answers to the same set of eleven questions posed to software testers around the world. I was inspired by reading Tim Ferriss' Tribe of Mentors: Short Life Advice from the Best in the World, in which he asked the same set of eleven questions to "130+ of the world's top performers...from iconic entrepreneurs to elite athletes, from artists to billionaire investors." It was amazing to read some of the similarities and themes in the answers, but also some of the huge differences thanks to the diverse group of people who responded.

This got me thinking - would a "Tribe of Mentors" style book with contributions from the software testing community be an interesting read? I thought it would, based on interactions I've had with many different testers I've met around the globe during my twenty-odd years in the industry. I crafted my set of eleven questions to pose to testers and here are just a few examples:

In thinking about the name for the book, I reached out to the testing community on Twitter to look for a suitable collective noun for testers and "exploration" seemed perfect. This book aims to explore the different opinions of testers around the world and it's also a nice connection to one of my professional passions, exploratory testing.

And so the concept and name for this book, An Exploration of Testers, was borne! The software testing community has been very good to me during my long career and I hope this book will help others looking to learn from a diverse group of enthusiastic testers from various industries and across different geographies.

My desire to write this book was never motivated by personal financial gain and so I have deliberately set a very low minimum price here on LeanPub. All proceeds from the sale of this book will be donated to the Association for Software Testing for use in their excellent Grant program to financially assist organizers of local testing peer conferences, meetups, etc.

In the IT industry since 1996 in both development and testing roles, Lee has spent most of his career helping Quest Software teams across the world to improve the way they build, test and deliver software. He currently helps teams and organizations to improve their testing and quality practices through his software testing consultancy, Dr Lee Consulting.

He is a co-founder of the EPIC TestAbility Academy, a software testing training programme for young adults on the autism spectrum.

He is a frequent speaker at international testing conferences and blogs on testing at Rockin' And Testing All Over The World. When not testing, Lee is an avid follower of the UK rock band, Status Quo; hence his Twitter handle @therockertester.