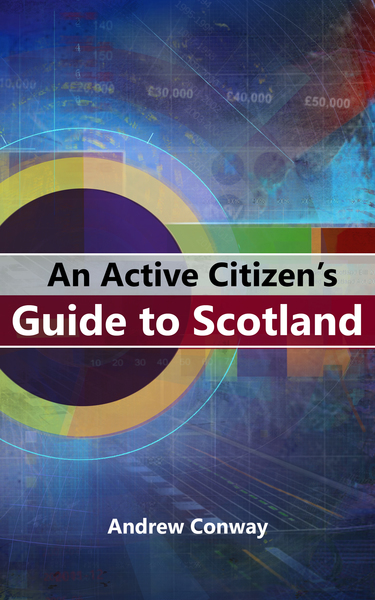 An active citizen's guide to Scotland

An active citizen's guide to Scotland

Have you felt frustrated when politicians and pundits juggle facts and figures leaving you baffled by a mess of complexity and opinion?

This book shares my understanding of the information that should underpin the political debate in Scotland. If you just want some facts and figures then you'll find them within, but the intention is not just to...

Have you felt frustrated when politicians and pundits juggle facts and figures leaving you baffled by a mess of complexity and opinion? Have you felt aggrieved when during a debate in the media mdash; either traditional or social mdash; opponents make contradictory claims on a point and you wish you could be sure who was correct, or at least closest to the truth? Or do you suspect a particular party mdash; one you oppose, or perhaps one you favour mdash; of cherry picking information or distorting the numbers?

My aim with this book is to share an understanding of the information and data that should underpin the political debate in Scotland. If you just want some facts and figures then you'll find them within, but the intention is not just to list statistics about Scotland; it is to highlight sources, dismantle barriers of jargon and place information in context. In short, to assist anyone who wants to improve their knowledge of our society.

Andrew Conway is an author, scientist and erstwhile entrepeneur. He went to Glasgow University at age 15, gained a BSc (Hons) first in Physics & Astronomy, was awarded a Faraday medal, and then a PhD on predicting and analysing sunspot number using neural networks. He spent several years researching solar physics and was appointed lecturer at the Open University Dept of Physics and Astronomy in 1999. It was in this post that he honed his non-fiction writing skills under the guidance of the OU's uniquely experienced editors, and he served as Science Editor on the BBC's Final Frontier astronomy magazine programme. He also worked on NASA's RHESSI mission at Goddard Space Flight Centre, for which he received an award for "Outstanding contributions to data analysis".

Andrew left academia in 2003 and founded a company that produced educational software which is still in business today. An offshoot from that turned into a business which was based in London and Glasgow that had early customers such as Google and JP Morgan. It received $12 million of funding from top-flight venture capitalists and threw him into the roller-coaster world of the tech start-up scene. He led the work on the backend for the UK government's ActOnCO2 campaign and web calculator, and was personally responsible for curating the data and calculations involved. This work took him into various meetings at Westminster and Holyrood, but mostly at DECC and DEFRA in London, and on one occasion to No. 10 Downing Street.

Andrew is a regular public speaker. For most of the last twenty years he has lectured for Glasgow University's Department of Adult & Continuing Education, which became the Centre for Open Studies in recent years. These lectures were mostly on astronomy, maths and physics which involved making subjects like Einstein's general relativity accessible to the layman.

*Some reviews of Beginner's guide to the universe:

This is a wide-ranging astronomy book, brilliantly written for 9-11 year ages, or thereabouts. The co-authors are an astronomer and a primary school teacher, and it shows in the result. The astronomical terminology is painlessly introduced, and material and ideas are presented in digestible chunks. … recommended strongly for anyone looking for a present for a youngster showing signs of wanting to know more about the Earth in space, all primary science teachers, and for additions to school libraries. I would cheerfully predict that it will help to attract more than just a few young readers into becoming serious students of the subject. Rochard Knox, GNONOM

The authors infuse the process of science and research into their text, letting the reader know the inside story about how theories and science 'facts' come into being. I'm not sure that I've ever read an introductory book in which this was done as well'. Sky and Telescope

The book is user-friendly, nicely broken up by headngs into small, easily-digestible sections …'. Southern Observer

It's an easy read, Conway's clear

In the afterword, Conway describes the process of discovery he went through as he wrote this book: "I am saying that reality is more nuanced than the views I had formed from popular discourse in the media, on twitter and in pub conversations." And that's really the key to why this book exists ... Conway's clear, straightforward prose is heightened by his eye for the telling detail, and occasional flashes of irreverent wit.