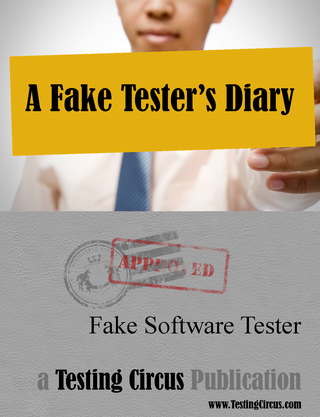 All Testing Circus subscribers will get this book free. Subscribe now at http://www.testingcircus.com/subscribe-to-testing-circus-magazine to get it Free.

Once you sign up for the group, visit this link to get the coupon code for free purchase of this book.

Adventures of a fake tester was originally intended to reflect the fakeness that occurs in software testing projects; It was intended as a series that would end after 6-8 editions, but thanks to the fake testers of the world, it has lived on to see two full years and does not seem to have an end date as I write this. Unlike many articles that actually put the reader to sleep, these set of articles have been specially designed to end before the reader starts sleeping. Over the past years, these columns in Testing Circus Magazine have witnessed thoughts about fake testing in many instances in appraisals, fake testing in interviews, corruption in software testing industry and all of these has been reproduced in this collection of articles; 3 sets of people need to be thanked for the adventures of the fake tester; 1st is the wonderful team of Testing Circus folks who have been very diligent in giving me "gentle reminders" whenever I have not been able to submit the articles on time by faking the "harshness" in their gentle reminders; 2nd is the team of all those fake testers who keep feeding me ideas and stories to write in this series; and 3rd is all of you wonderful readers who have managed to remain awake throughout these columns.

What has this author achieved in testing? This author has tested more than a million lines of code and has logged more than a billion defects; He has reviewed other test cases and found at least a trillion missing test cases and has coached his peers to log more than a quadrillion bugs; He has talked more than a Quintillion words while participating in triage meetings and he has been a part of sextillion arguments convincing the developer of the bugs. He has done good researching on septillion testing conferences; every day, he has Octillion thoughts that come to his mind on the problems that plague the world of software testing. He has selected Nonillion testers from his Decillion testing interviews and has unsuccessfully attempted to coach Undecillion testers about testing. His writings are followed by DuoDecillion readers and the comments on his blog are more than Tredecillion; he has answered Quattuordecillion questions on testing in various forums. And by the way, like the monthly columns, the above contains Quindecillion amounts of exaggeration on what I have done so far in my life.