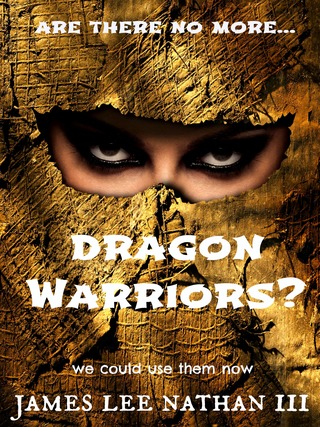 "Dragon Warriors accomplishes what Cowboys and Aliens wanted to be; it's a Sci-Fi Western which comes from long ago, far away, and way ahead, all the while packing an Eastern philosophical meta-punch." Jordan Margolis

Have you ever wondered why man has always looked to the stars for spiritual guidance and worship, instead of within? Have you ever imagined that visitors came to us many ions ago, and possibly influenced the primal inhabitants of earth? Have you ever marveled at the countless acts of heroism in the face of unimaginable odds and wondered to yourself "How can they do this, what motivates them to these great deeds?" Could it possibly be that the blood of humanity is also that of another race of people? These are all things you must consider as you read through the pages of this book. Where heroes, both known and unknown become more than fact, history, or legend. Come with me now as I take you on a journey of our past and future. To distant lands and long forgotten galaxies. We will start in the desert during the Crusades and end 700 years later at the death-bed of U.S. Marshal Bass Reeves. All in the hopes of identifying the descendants of Ibrahim, and possibly answering the question once and for all "Are there no more Dragon Warriors?"

James Lee Nathan III was born in Birmingham, Alabama and moved to Jackson Heights Queens NY in 1963. He grew up in Corona and East Elmhurst and graduated from the HS of Art and Design in 1979. He entered the US Air Force shortly thereafter,served 20 years and retired in August of 1999. He was stationed overseas for 18 of the 20 years and has been to 40 states and 10 different countries. He loves pugs, jazz, beer, and the company of an intelligent and pretty woman on occassion. James is single and resides in Severn, Maryland with his two daughters and two pugs.

Aanisa has read the first 40 pages on my ipad and immediately said "You need to finish this soon dad I like it."
Aayana Nathan

Aayana helped me fashion some of the ideas for this offering and is writing book 2 Siobahn.
Latif Ali

My brother whom I love dearly. He inspires me to do great things I never would have imagined possible without his love.