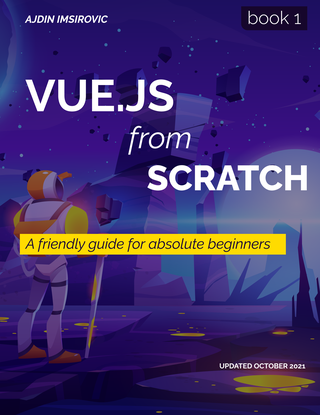 A friendly guide for absolute beginners

In this no fluff book, we dive straight in to building apps in Vue.js. Every step is explained and each concept is covered so it's easy to understand.

In this no fluff book, we dive straight in to building apps in Vue.

In chapter 1, we build the smallest possible Vue app, and get to know about:

* How to mount a Vue app

* String interpolation and data in HTML

* Adding a Vue instance and its options object

Once we've learned the very basics of how Vue is put together, we build a simple todo app in Vue 2.6, in chapter 2. Through the building of this app, we learn new concepts and build on the existing ones:

* Handling more than one keypress event

* Adding a toggle button with text and style updates

* Utilizing confirm popups in our apps

In Chapter 3, we introduce Vue CLI, and cover the following topics:

* How to install Vue on our machine,

* How to build a new Vue app using Vue CLI,

* How to serve our boilerplate Vue app in the browser,

Vue CLI, and we discuss what they do and how they fit together

In Chapter 4, we have a sort of a revision of concepts from Chapters 1 and 2, but this time covered through the lens of working with Vue CLI, including:

* How to add a child component to our project

Vue instance, and interpolate that value in our single-file component’s template section

In Chapter 5, we learn about single-file components in a Vue app:

* Revising interpolation (this time, in SFCs)

* Templating with values returned from methods

In Chapter 6, we discuss data flows in a Vue app:

* Sending data from the parent component to a child component

* Sending data from the child component to a parent component

* We practice components' communication by building another Vue app

In Chapter 7, we integrate a linting tool, ESLint, and a library, Bootstrap Vue, with our Vue CLI-powered Vue apps

* Revision of basic concepts: installing Vue, preparing VS Code to use it, installing the boilerplate Vue.js app with Vue CLI, removing redundant code from the starter app

* Setting up ESLint to work with Vue.js

* Styling our app with BootstrapVue

* Restarting our app (dealing with some weird errors)

In Chapter 8, we build the todo app again, this time with Vue CLI. This serves a double purpose:

* We revise all the concepts needed to build a todo app

* This chapter is a practical example on converting a non-Vue CLI app to a Vue CLI SFC Vue app. The insights you'll gain here are very valuable for a new Vue developer

In Chapter 9, another hands-on chapter, we continue working with the app we've built in Chapter 8, but this time we demo how to split a single file component into a component and a sub-component. We show the practical implementation of one-way data flow approach on an app that we're now quite familiar with, which helps us keep focus on understanding how to make our Vue apps more modular.

In Chapter 10, we "back-fill" our knowledge with some basic concepts that we've skipped in earlier chapters.

Ajdin Imsirovic is a full-stack web developer who has published several courses (way back in 2015) on the subject of web design and web development.

Before self-publishing books on Leanpub, he authored four books on front-end development for Packt Publishing:

Additionally, he's published a number of books on the Leanpub platform, specifically:

An Interview with Ajdin Imsirovic