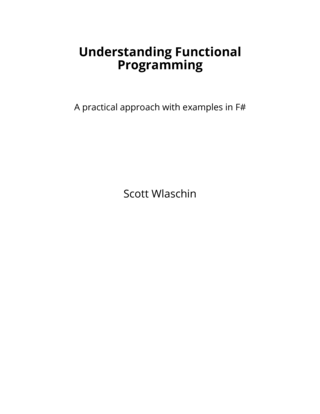 A practical approach with examples in F#

A lot of people have asked me when the book will be ready. I apologize for the delay! I'm actively working on it now and hope to have some news next month. Stay tuned, and thanks for your patience!

The goals of this book

This book will introduce you to the core concepts of functional programming and show you ways that these techniques can help in day-to-day development of mainstream commercial business software.

And on the way, I hope to open your mind to the joys of functional programming as well. It's corny but true; there really is fun in being functional!

Learn to think functionally. "Thinking functionally" is critical to getting the most out of a functional programming language like F#, so I will spend a lot of time on getting the basics down, and I will avoid too much discussion of the hybrid and OO features.

Useful examples. The book will mostly focus on mainstream business problems, such as domain driven design, data processing, business rules, and so on. In the examples I will try to use business concepts such as Customer, Product, and Order, rather than overly academic ones.

The examples are in F#, but the ideas can easily be transferred to similar languages such as OCaml and Haskell.

Don't be scared. A functional programming language like F# can look very intimidating if you look at complex code without any background. In the beginning I will keep it very simple, and I have tried to anticipate the questions that a newcomer to functional programming concepts will have. If you work through the examples slowly (and in the right order) you should have no problem understanding everything.

Have fun! Many people claim that learning to think functionally will "blow your mind". Well, it's true! Learning a completely new paradigm is exciting and stimulating. You may fall in love with programming again.

In this first part we'll demystify functional programming and take a quick tour.

In this part we'll look at the fundamental concepts behind functional programming.

Next, we'll introduce some common approaches functional patterns and techniques.

Finally, we'll build on the previous concepts in order to create working programs.

In this section, we'll provide some tips for porting imperative and object-oriented code to functional code. Topics covered will include: dealing with immutability, implementing inheritance, method overloading, and so on.

We'll also compare object-oriented patterns to functional patterns and find that most of the OO patterns such as "strategy" and "decorator" are trivial in FP.

Many of the topics in this book, and more, are covered on my website at fsharpforfunandprofit.com.

If you have any comments on the planned contents of the book, please leave them in the comments section. Also, please go to the comments to respond to some polls on variants of this book, such as: would you like editions with other language examples (Haskell, Scala?), and is there any demand for a hard-copy (dead tree) edition?

Scott is a .NET developer, architect and author. He has over 20 years experience in a wide variety of areas from high-level UX/UI to low-level database implementations. He has written serious code in many languages, his favorites being Smalltalk. Python, and more recently, F#, which he blogs about at fsharpforfunandprofit.com.