Mike has been working in testing for 20 years and is currently the tester for Geckoboard. He has been a member of a test team, a Solo Tester and a Test Lead. He has also worked as a part of waterfall, lean and agile teams.

Mike has a B.Sc.(HONS) from Middlesex University and is an Associate of the University of Hertfordshire. He has set up and led a Testing Community of Practice and been part of a successful agile transition. He is also Programme Secretary of the British Computer Society’s Specialist Interest Group in Software Testing.

He also contributed to the e-book Testing Stories and has had articles published by the Ministry of Testing and The QA Lead.

In his spare time he coaches his daughters cricket team

Mike has a blog at http://testandanalysis.home.blog/ 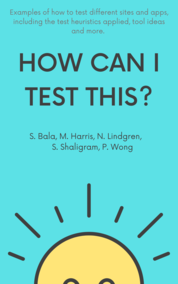 How Can I Test This?
Nicola Lindgren, Mike Harris, Suman Bala, Philip Wong and Shawn Shaligram
Leanpub requires cookies in order to provide you the best experience. Dismiss