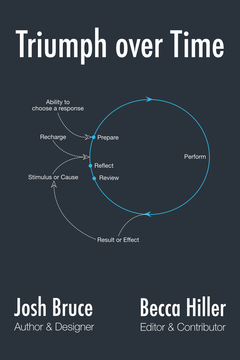 If the works of the Project Management Institute, various Agile Software Development organizations, Lean Thinking, Stephen Covey, David Allen, Francesco Cirillo, and the like were the ripe grapes of a vineyard, Triumph over Time is not the wine made from them. Rather it's a severe reduction made from the grapes; intensifying the flavors, removing the dilution, and adding some new flavors.

The grapes have been pounded, purified, and distilled into wine, I've taken the wine home, thrown it in a pot, tossed in my own seasonings and a bit of wine from some others, and reduced all of it by at least half.

Stephen Covey describes four generations of time (and possibly life) management. I see a fifth enveloping the first four; in the same way successive generation enveloped the one coming before them. The fifth generation solidifies and firmly plants the concepts of flow, agility, purpose, and by extension, mindfulness into self-management.

Released to Apple Books. Continuing marketing for Leanpub and the Nook. Reach out other media outlets to increase marketing push.

Finished business switch, at least as it pertains to publishing. Extended discounts, notifications on various social media platforms. Triumph over Time is officially release on the Nook Store. Updated roadmap to reflect the one month slip.

Ran into a lot of issues with 8fold itself, specifically, as it relates to publishing and, well, physical mail to be honest. Eightfold Productivity become just 8fold and moves from VA to TN, while I'm living in WA.

Continued integration of new information and feedback. (This was a slow month due to personal reasons.)

Drip release of Triumph over Time via Leanpub (at least one chapter per week), Round Three Beta Reader reading, and integration of new information with more polishing.

Round Two Beta Reader sign up, Round One Beta Reader reading, and integration of new information and feedback.

Round Three Beta Reader sign up, Round Two Beta Reader reading, and integration of new information and feedback.

I'm a wanderer and a collector of stories who feels like an alien dropped on a ship with limited time to interact and explore.

Working as a life and Agile Coach. Academically focused in the fine arts. Personally trained in software engineering. And fascinated by the human condition of being an alien on a ship set adrift in a sea of stars surrounded by 7+ billion other aliens here, for what seems like, the first time; all that to say, I have an affinity for the humanities (mainly psychology, sociology, and philosophy).