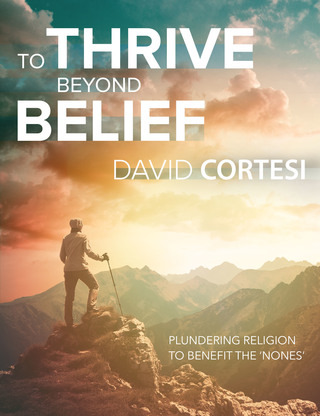 To Thrive Beyond Belief

To Thrive Beyond Belief

Plundering religion to benefit the “Nones”

This book is about finding secular sources for things we once looked for in a religion, like community, purpose, morality, and courage in the face of death. For those who don't practice a religion, here are ideas on how to thrive — beyond belief.

We all want to lead a life of excellence: an honest life; a creative life; a generous life; a life that, when it is over, leaves a monument of good memories. Once, religions claimed to own the map to that well-lived life. Today, for the many who don't make religion part of daily life--we who pollsters and sociologists like to call "Nones"--the old answers don't work, but the questions remain: Why do we exist? How should we behave? How do we face death? In this book we look for secular tools for the well-lived life. We pick from various religions the things they did well, but we prefer answers that don't depend on dogma, and above all, answers supported by contemporary science. With them we can thrive, beyond belief.

Dave Cortesi has been writing programs and prose since the 1960s. In the 1990s he published a number of technical books, both under his own name and as an employee of first Informix and later Silicon Graphics, all of them about computer software that nobody even remembers now. So it goes. After formal retirement he wrote Secular Wholeness just for fun, then wrote some software, and now circles back to take up the question of living well without religion in a new era when religion isn't even a question for first-world millenials, bless their skeptical little hearts.