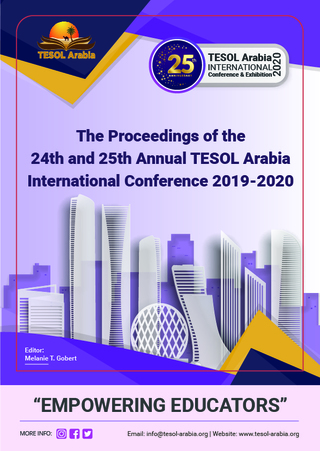 This book has 21 chapters on topics presented at the 24th and 25th TESOL Arabia International Conference and Exhibition. The chapters range from philosophy in English language teaching to new concepts of translanguaging in education to using authentic literature in the classroom. It contains case studies, ethnographic studies, and quantitative studies on language learning and teaching.

Melanie Gobert was on the faculty at the Higher Colleges of Technology, Abu Dhabi Men’s College. She was the editor of Perspectives, the TESOL Arabia peer-reviewed English Language Teaching journal, from 2009-2014. She has co-edited a book, Current Issues in Reading, Writing and Visual Literacy: Research and Practice (2015) published by Cambridge Scholars. She has published and presented widely in the region, including, “Taboo Topics in the ESL/EFL Classroom in the Gulf Region,” in Intercultural Communication with Arabs (2014, edited by R. Raddawi, Springer). She has two chapters on “Accommodation in ESL,” and “Realia” in the new Wiley Publications A to Z of Assessment and A to Z of English Language Teaching. She was the editor of the Student Edition of From Rags to Riches: A Story of Abu Dhabi by Mohamed Al Fahim (Makaram Publishing, 2011). She has also published “Grammar Correction in ESL Writing Classrooms,” in Cultivating Real Writers (HCT Press, 2010) and “Key Findings from Research and Implications for the Classroom,” in Cultivating Real Readers (HCT Press, 2010). She was a featured speaker at the 2nd World Congress on Extensive Reading held in Seoul, Korea in 2013, and she presented on “Language Learner Literature and Identity” at the Excellence in Language Instruction: Supporting Classroom Teaching and Learning Regional TESOL International Conference at the National Institute of Education in Singapore in December 2015.