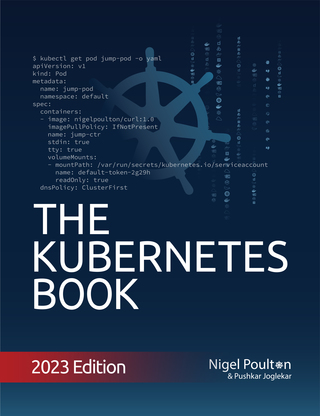 Containers are here and resistance is futile! Now that people are getting their heads around Docker, they need an orchestration platform to help them manage their containerized apps. Kubernetes has emerged as one of the hottest and most important container orchestration platforms in the world. This book gets you up to speed fast!

This is a book about Kubernetes - no prior knowledge required!

It's designed to teach you the theory and the practical as fast as possible so that you can hit the ground running with your first Kubernetes deployment.

I’d like to thank Pushkar for his writing the security chapters. He approached me at

a KubeCon and asked if he could contribute some content on real-world security. Collaborating on content isn’t something I’ve done before, and I tried to tell him “no thanks”. However, he was keen, so we made it happen. To be clear, the technical content for the security chapters is all Pushkar’s. I just tweaked the writing style so the book has a consistent feel.

Nigel is a techoholic who spends his life creating books, training videos, and other stuff that makes learning Kubernetes less scary. He’s the author of best-selling books on Docker and Kubernetes, as well as the most popular online training videos on the same topics. He’s also a Docker Captain. Prior to all of this, Nigel held various senior infrastructure roles at large enterprises (mainly banks).

When he’s not playing with technology, he’s dreaming about it. When he’s not dreaming about it, he’s reading and watching scifi. He wishes he lived in the future so he could explore space-time, universes, and tons of other mind-blowing stuff. He likes cars, Formula One, golf, football (soccer), and food. He has a fabulous wife and three epic children.

Pushkar is currently working as a Security Engineer @ VMware Tanzu to help make Kubernetes secure-by-default, for all. In the last few years, he’s built multiple “secure by design” production container deployments for a Fortune 500 company and is an active contributor in the CNCF security community.

When not securing containers, he spends his time exploring neighborhood bike trails and capturing beautiful sunsets through his camera while sipping home-made masala ginger chai. He lives with his wonderful wife, who happens to be the real engineer among them.

An Interview with Nigel Poulton

No results found in All Categories in All Languages.