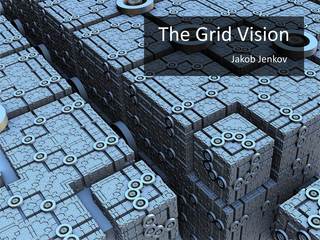 This book is 20% complete

The software developer community, have been stuck with the web technologies since the 1980'es. The web technologies (HTTP, HTML etc.) were originally desgined as document formatting and document  exchange technologies. Time to take a step back and redesign Internet communication from scratch!

The Grid Vision describes the vision behind "The Grid". The grid vision consists of a set of ideas and technologies which form an alternative to "The Web".

The Grid is designed for a wider set of use cases than the web. Examples of potential use cases are digital radio, file backup, remote procedure calls, video streaming, message queue subscriptions,Internet of things etc. In short, the grid vision is targeting the Internet of Everything (IoE).

We know a lot more about designing high performance, scalable, robust distributed systems today than we did 30+ years ago when the web technologies were first conceived. We do our best to take as much of this knowledge into consideration in the design of the core grid technologies.

Jakob Jenkov is a technopreneur, software architect and writer / publisher focused on the big ideas in the software and tech industry. Jakob feels most at home in the nexus between business and technology.

Jakob pursues his interests via his company Jenkov Aps (jenkov.com). Jakob is also the co-founder of VStack.co (vstack.co), which aims at creating a new set of grid ideas and technologies for a faster, more versatile and more intelligent Internet.

Jakob has published more than 800 technical articles which attact millions of readers every year, and produced a few videos which attract hundreds of thousands of viewers every year.

Jakob has worked with web development and enterprise software since 1998. Most of the time he has worked as a freelance consultant for larger, well-known corporations like IBM, CSC, SDC, Nordea etc. The later years Jakob has taken a step back from development to focus on software architecture an the business context in which it exists.